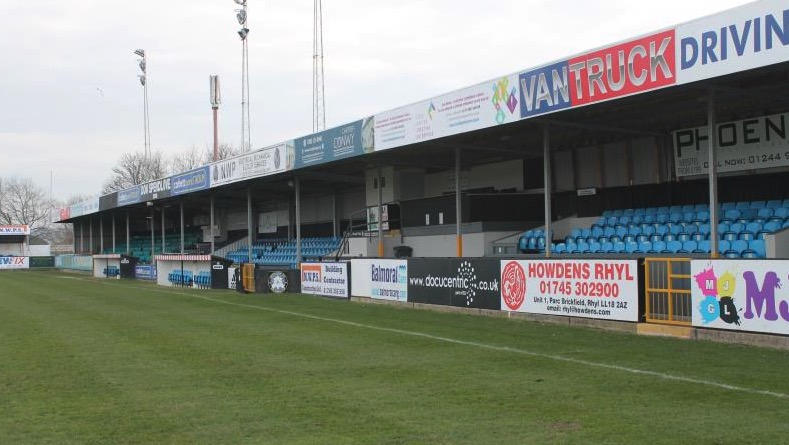 The confirmation comes after a safety meeting at the Belle Vue Stadium on Monday.

With the Deeside Stadium unsuitable for European games, Nomads declared Rhyl’s ground their first choice venue for the home leg of the tie.

The Coleg Cambria owned Deeside Stadium in Connah’s Quay only seats 420 and UEFA regulations state that standing is not an option.

It’s an issue which also impacts on the capacity of the Belle Vue Stadium, it can hold up to 3000 people – but with UEFA’s no standing rules applied – that has been halved to just short of 1500 for the match.

The Football Association of Wales has had ‘unsuccessful’ talks with Wrexham FC over using their 10,700 seat Racecourse ground but a new pitch is due to be laid

Kilmarnock fans have been given just over 800 tickets for the match on July 11, around 55 per cent of the permitted total capacity at Belle Vue Stadium.

It will be the first European game in 18 years for Kilmarnock who’s average home attendance last season was 7000.

When the draw was made ‘chatter’ on social media estimated around 2000 Kilmarnock fans would make the trip to the North Wales coast for the tie.

Kilmarnock have acknowledged demand for tickets will be high and “certainly exceed” the 800 allocated.

The “situation is one which is sadly out our control due to the limited capacity of the stadium.” The club website states.

It goes onto say: “for this particular match, first priority will be given to Supporters Clubs who regularly run transport to away matches,” a move which may see hundreds of Kilmarnock fans travel to Rhyl without tickets.

A spokesperson for Connah’s Quay Nomads said: “The stadium was our first choice stadium that we declared to UEFA upon entering the First Qualifying Round and despite the obvious interest in tickets for the game from both clubs, we were unable to relocate the game to a larger venue.

The FAW spoke extensively to Wrexham FC in an attempt to use The Racecourse however these attempts proved unsuccessful.

Suggestions were made from within the club to potentially play the game at other locations, however due to the stadia not being UEFA graded, they would have been rejected immediately by UEFA.”

The match takes place on Thursday 11th July with a 7:00 pm kick off time.

Tickets
Connah’s Quay Nomads will have all 662 seats in the Don Spendlove stand.
The tickets will be priced as follows;
• £20 Adults
• £15 Concessions, students and anyone aged 16-21
• £5 for anyone under the age of 16