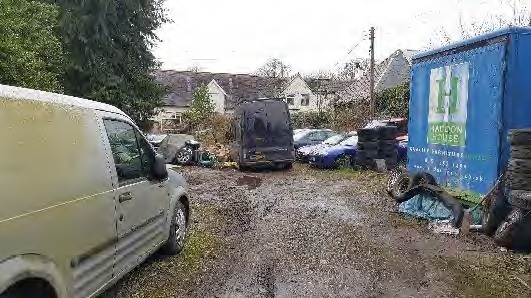 The owners of a house near Caerwys have launched an appeal after being told to remove cars and other scrap items from outside their property.

It followed longstanding complaints about the untidiness of land at their home in Afonwen, known as Tangnefedd.

The local authority has demanded they get rid of an extensive list of objects from outside the property, including cars, car parts, plumbing pipes, boilers, building machinery and construction materials.

The enforcement notice also calls for the removal of gas bottles, a metal stage, filing cabinet and household rubbish.

While Mr Pickford and Ms Goodfellow acknowledged the area surrounding the house needed tidying, they have now lodged an appeal with the Planning Inspectorate.

It comes after a consultant acting on their behalf said the use of the land for storage had taken place for more than ten years and was therefore lawful.

In an appeal statement, Eleanor Carpenter from Cadnant Planning said: “Since purchasing the property, the appellant has collected a number of cars with a view to working on them and / or using the spare parts for his own personal use and has collected some building materials to assist with the on-going and future works on the buildings.

“They are attempting to reduce and tidy this over a reasonable time period, given that they both work and have family commitments, which impacts on the time available.

“In addition to this, due to the amount and location of possessions, it is necessary to apply a staged approach in their removal as a number of items cannot be sorted and removed until other possessions have been removed from the site.

She said eleven vehicles had already been removed from the site, along with a static caravan.

The notice was also appealed on the grounds that the list of items for removal included personal possessions, which she argued was “unreasonable” to request.

The appeal documents include an e-mail from a council planning officer sent to the pair in September last year.

In the message, Alison Dean indicated that the authority was not content with the list of items they intended to remove.

She said: “Thank you for sending the schedule through identifying priority areas, which you are intending to focus on in order to start to tidy the land under your ownership.

“I note however that you have only mentioned the removal of six vehicles, four of which have already been removed.

“There were in excess of 20 cars at the front of the property during my last visit and a number also round the back, not in personal use.

“Also witnessed were a number of commercial vans and trailers and lots of vehicle parts, scrap and general household paraphernalia.

“As discussed, several vehicles for personal use would be acceptable at the property but not the amount stored on the land.”

She asked them to send a revised list of items for removal and said an enforcement notice would be served if the site had not been “significantly improved” by the end of last November.

The appeal will be dealt with by an inspector appointed by the Welsh Government at a later date.