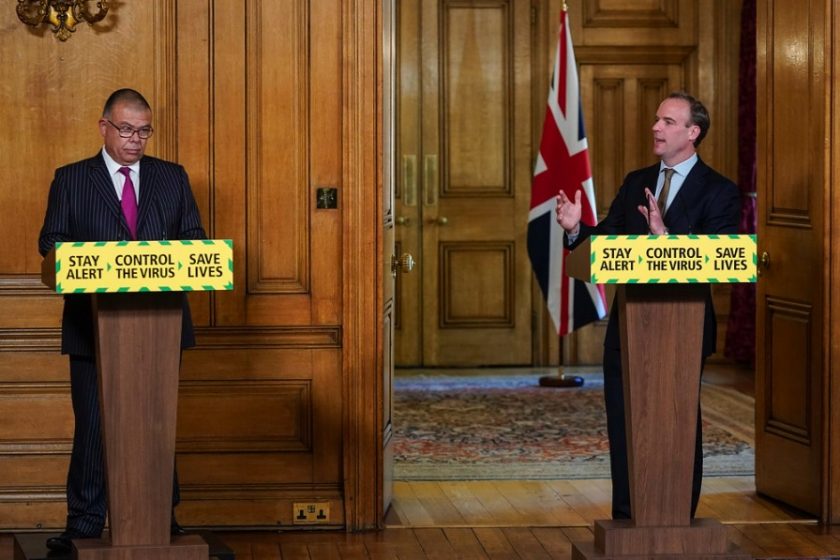 The Foreign Secretary sidestepped a question about whether relaxing the lock down in England was undermining efforts to control Covid-19 infection rates in North Wales.

Dominic Raab, speaking at 10 Downing Street’s daily coronavirus meeting, said there had been “good collaboration” between his Government and the devolved powers.

He also said the UK Government “recognised” nations may go at different speeds but claimed there had been a “UK-wide approach” to tackling the virus.

On the specific question of whether he thought relaxed lock down rules in England undermined attempts in Wales to keep Covid-19 infection rates down  he was less forthcoming.

He said: “We have been very clear. Anyone who wants to travel from England to Wales, or any other part of the UK, is to be very mindful of the regulations that the devolved administrations have in place.”

He declined to say whether the influx of people from England was “undermining” Welsh efforts to keep a lid on the spread of the novel coronavirus strain.

Over the weekend North Wales Police stopped around nine people in a three car convoy who had travelled to Bala from Manchester.

In a separate incident 11 people who had travelled from Manchester to Anglesey were sent packing.

Deputy chief medical officer for the UK, Professor Jonathan van Tam said he would be “much more worried if there was a separate stream of science” coming from the devolved nations.
He added: “The decisions that are made are always a complex blend of science, politics and practicality.

“We need to recognise all parts of the UK make their own decisions. I would be more worried if there was a separate stream of science coming from other nations.
“SAGE is a community that covers the whole of the UK in that sense.”

North Wales Police and Crime Commissioner has called on law makers to increase fines for those coming over the border and using Wales as a destination for days out and walks during the lock down period.

Today First Minister Mark Drakeford conceded that lock down fines could rise if people continue to flout the law.