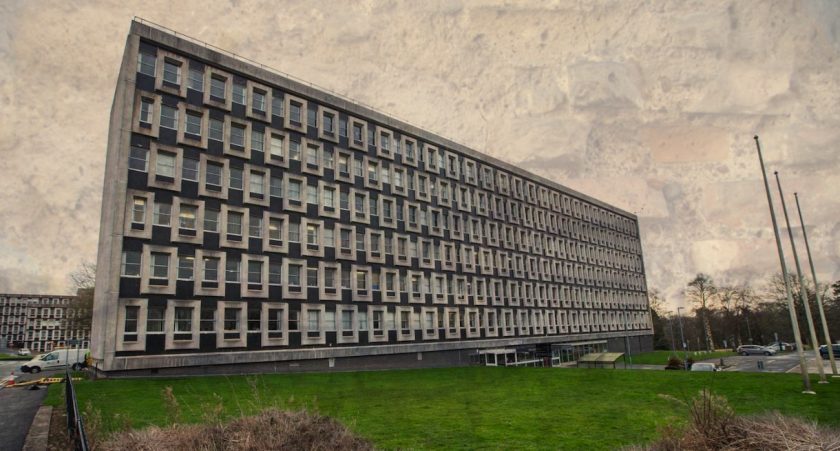 Flintshire residents will have to pay an extra *£75 a year after politicians voted on Tuesday to increase council tax by 4.75 per cent.

Despite being the third biggest increase in Council Tax in the past 10 years, Flintshire councillors unanimously backed the increase, which had been agreed by the council’s cabinet committee earlier in the day.

Residents have faced hikes of 6.7 and 8.75 per cent in the last two years, and the council gave a commitment to cap any increase on Council Tax at 5 per cent.

In October, Flintshire Council warned it was in danger of being unable to set a balanced budget for 2020/21 amid uncertainty over how much money it would receive from the Welsh Government.

Ministers in Cardiff gave the council a funding uplift of over £10m, a 3.7 per cent increase on the previous year.

Colin Everett, Flintshire Council’s chief executive said cabinet was able to set “a legal and balanced budget” which means Council Tax for the forth coming year would will be around the Welsh national average.

Mr Everett, presenting the budget proposals to councillors at a meeting in County Hall, Mold, said:

“Cabinet is both pleased and relieved to be able to recommend to Council a legal and balanced Council Fund Revenue Budget for 2020/21.

Faced with having to bridge another large budget gap, this year in the region of £16m, the budget-setting process has once again been a monumental task.”

The ‘real increase’ in Council Tax will be 4.5 per cent, with North Wales Fire and Rescue Authority’s levy of 0.25 per cent added in it rises to 4.75 per cent.

There was a sense of relief among officers and councillors that a balanced budget has been achieved and that Council Tax is being kept below the self-imposed 5 per cent cap.

Mr Everett said: “Although we are now in a position to balance our annual budget, something that seemed an improbability only four months ago, we are not in any way complacent.

We will face a number of open risks in-year and, once again, will need to be prudent in managing our budgets tightly.

Our reserves and balances are at their lowest ever level.

It will be essential that we stabilise and then grow our reserves over the year to come.”

Cllr Ian Roberts, who runs the Labour-led administration in Flintshire called for a period of financial stability, he compared the budget setting process to the painting of the Forth Bridge which “never ended.”

The local authority received a welcome boost from the Clwyd Pension Fund this year with a ‘dividend’ of over £8m which has contributed to balancing the forth coming year’s budget.

A point acknowledged by Cllr Richard Jones (Ind) who said: “The Clywd Pension Fund, if we hadn’t have had that (dividend) then we would have been looking for another 4 per cent, we would have been at the levels of the 8 per cent again, and we weren’t happy with that.”

The Welsh Government came in for criticism, Colin Everett said: “Council Tax is becoming unsustainable and should not be relied upon by Governments to compensate for inadequate national funding settlements.

Welsh Government itself has set a guideline figure for annual Council Tax rises across Wales of 7.1 per cent.

This is an admission by Welsh Government that its own funding is inadequate to meet need.

Cllr Tony Sharp (Ind) launched a scathing attack on the Welsh Assembly and its perceived lack of support for North Wales.

Cllr Paul Shotton (Lab) was in full of the proposed budget and said “ how proud we should be in Flintshire for the continued achievements that have been made in our care homes, our social services council houses which are being built and increasing year, year on year.”

He also said we should be proud of the “21st century school program, especially the transformation of Connah’s Quay High School and the new homeless facility in Queensferry.”

Cllr Shotton said the funding settlement “is very welcome” but, like others called for “fundamental review” of the funding formula, particularly considering the 7.1% Welsh Government stated guideline on council tax.

For the Council Tax payer the ‘bottom line’ average increase for a Band D household – once the Police precept and the precept for the Town and Community Councils have been included – comes out at 4.68%.

“We would rather be setting a Council Tax nearer the Consumer Price Index” which averaged 2.1 per cent in 2019.

However, the annual rise we are proposing is around the expected Welsh average, with some neighbours in North Wales having no choice but to set their Council Tax at a higher rate.”

By coming 2.35% under this guideline figure, Flintshire can demonstrate that it is shielding the Council Tax payer from unreasonable demands.” he added. 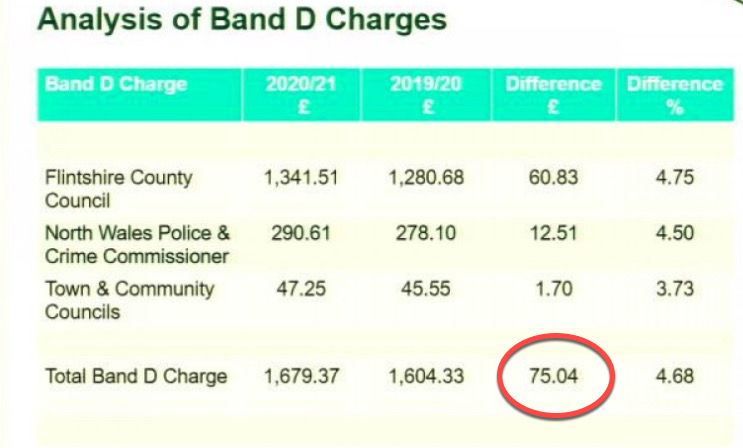 [Grainy screenshot of a slide from Tuesdays’ presentation to councillors by council officers – it shows a Council Tax increase of £75.04 on Band D properties]

Mr Everett called on the UK Government to set out its plans over the next three years for public spending, he said:

“Flintshire and all other councils in Wales now need certainty over future budgets from governments.

We cannot go through this annual cycle of planning for the unknown – with all the worry and anxiety that this brings to so many people who depend on us.

We now call on the new UK Government to set out a three year forecast for public expenditure plans, to work with the devolved nations to mutually agree realistic growth plans for their devolved budgets, to prioritise finding a national solution to funding social care, and to set out a national strategy for funding public sector annual pay awards.

We now expect annual uplifts in government funding from Welsh Government of a minimum 4%.”

The main proposal to put council tax up by 4.75 per cent was unanimously approved by councillors.

*Figure based on an average Band D charges.

70 young saplings of native species are growing in the school’s environmental area, ’The Dell’. Thanks to @TheTreeCouncil for donating the trees and to Mr Chalk and his students for giving up their time to get the saplings planted. #trees #planet #green