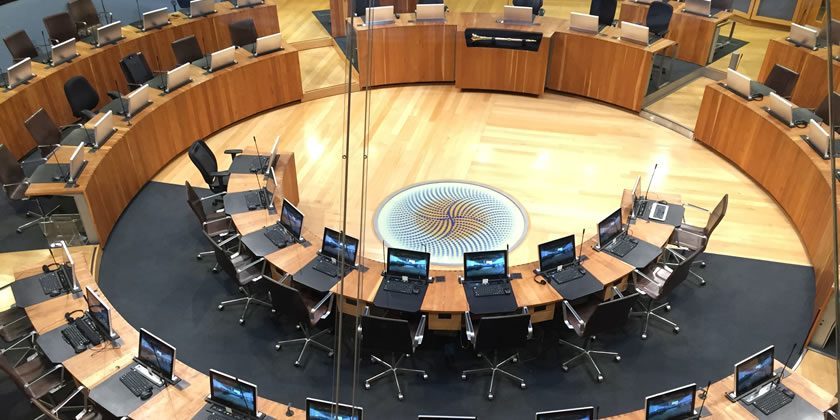 The below a summary of this week’s First Minister Questions session from Cardiff Bay via our now regular partnership with SeneddHome.com.

First Minister Questions takes place every Tuesday when the Assembly is sitting and can be watched live via Senedd.tv .

As the First Minister’s still in Japan on a rugby related mission, Finance Minister & Trefnydd/Leader of the House, Rebecca Evans (Lab, Gower), was filling in for the session yesterday.

While another sub, Rhun ap Iorwerth AM (Plaid, Ynys Môn), managed to find agreement that the language used by the Prime Minister to disrespect the assassinated Jo Cox last week was “shocking”, he turned attentions to the Welsh Government’s own language in the recently-published Brighter Future for Wales document (which SeneddHome.com summarised here):

“….in that document the Government floats proposals, including summary deportation of migrants and tracking of migrants through national insurance….the hypocrisy there of saying that at a time when your party conference
voted to maintain and extend freedom of movement, do you understand concerns that this could ratchet up a sense of creating a hostile environment towards migrants, and could actually encourage the kind of intolerance that has become such a feature of the Brexit debate?”
– Rhun ap Iorwerth AM

The Trefnydd said Rhun ap Iorwerth was misrepresenting things and that the document doesn’t advocate forced deportations, “nowhere in that document have we advocated forced deportations, and nowhere have we advocated or talked of a hostile environment for migrants from anywhere in the world or the imposition of identity cards, which I know is something that Plaid Cymru have also said that we would seek to impose.”

The document says current migration rules needed to be properly enforced; the Republic of Ireland has a three-month jobseeker limit before an EU/EEA migrant either has to leave or prove they can support themselves.

In a second question relating to the Bill to change the Senedd’s name – due to be debated again in the next few weeks, with an amendment set to be tabled by Carwyn Jones AM (Lab, Bridgend) to ensure a bilingual name instead of just “Senedd” – the Trefnydd confirmed Labour AMs will have a free vote.

Leader of the Opposition, Paul Davies AM (Con, Preseli Pembs.), was somewhat complementary towards initiatives to support veterans who are suffering mental health issues. He cited a trail by Cardiff University and Cardiff & Vale health board for veterans suffering PTSD – which has been supported by £150,000 from the Help for Heroes charity.

The Trefnydd who, as said, is also the Finance Minister was unwilling to make any firm spending commitments while next year’s budget was still being drafted. While not ruling in or out the idea of an Armed Forces Commissioner, she believed there was room for extra co-operation with the Ministry of Defence:

“I think that there’s already been some engagement at official level to see how we can best work together to support veterans because some aspects will be devolved and non-devolved. Where we can work closely together with the Ministry of Defence and other partners to deliver for the armed forces community here in Wales, we will certainly seek to do that.”
– Finance Minister & Trefnydd, Rebecca Evans

Mark Reckless AM (BXP, South Wales East) also picked up on the Welsh Government’s “Brighter Future” report. He suggested it was more a campaigning document than a serious analysis – though the Trefnydd disagreed, saying that it was drafted with the help of the Chief Economist and if Mark Reckless didn’t like that report, he would find similar assessments from the UK’s Office of Budget Responsibility.

Mark Reckless then went through several different economic projections, including Bank of England forecasts, which either haven’t happened or have been revised. He suggested the Welsh Government was basing its report on “wholly implausible” scenarios.

“Over the next 12 months, the Bank expects only modest growth in GDP, so just 1.5%, and businesses – the Bank of England argues it, not me – will prove reluctant to invest against a background of Brexit-related concerns, and….net exports are not expected by the bank to contribute materially to growth. So, we’re always keen to hear what the Bank of England has to say, but unfortunately for Mark Reckless, none of it will be good news to him.”