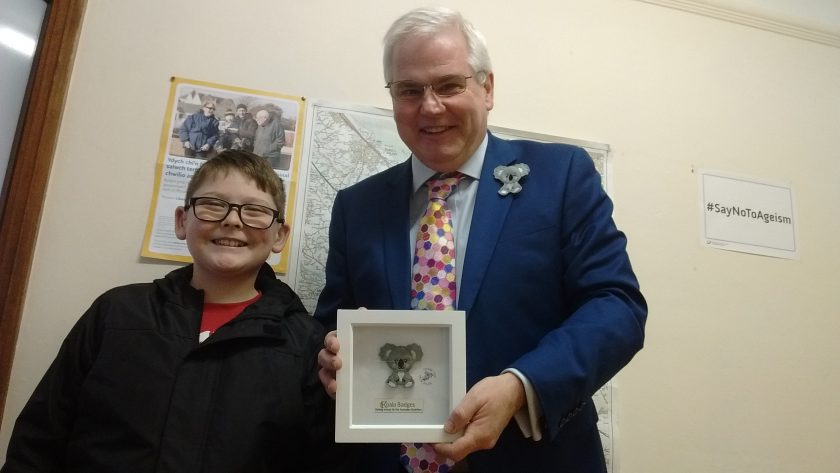 A ten-year-old boy helping areas of Australia ravaged by fire by making koala badges has delivered a badge to his local MP in person.

Shotton youngster Dylan Valentine was inspired to raise money to help Australian firefighters and the Koala hospital in Macquarie by making and selling embroidered koala badges.

Dylan helps his mum Nicky make the badges and started off selling them at school.

As word has spread about Dylan’s kind deeds, he has received messages of support for his initiative and orders from around the world.

Dylan has now received more than 300 orders, including one from his local Member of Parliament Mark Tami.

On Friday Dylan and his mum called in to the Alyn and Deeside MP’s Connah’s Quay office to meet Mark and deliver his koala badge.

“I wrote to Dylan after hearing about his creativity, hard work and kindness in making these badges and selling them to help the people and animals affected by the Australian fires,” said Mr Tami.

“The messages and orders he has received from across the world show how much his actions have touched people – it’s great to see such positive spirit.

“I’m happy to support Dylan’s appeal and will wear my koala badge to Parliament with pride.”

Orders for koala badges can be played via Nicky’s Facebook page: The Monkey Lady at Valentines Occasions.