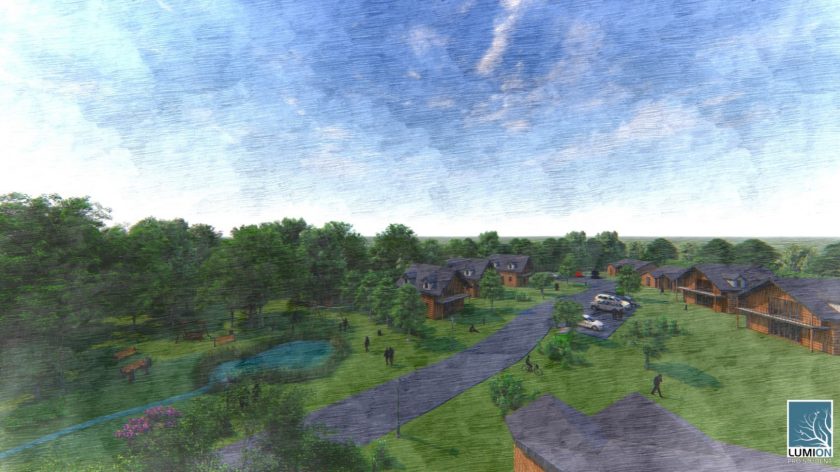 Plans to create a tourism development at a country park in Flintshire have been thrown after being compared to a housing estate.

Proposals were submitted in June last year to transform a piece of land at Northop Country Park by using it to house up to 30 lodges, as well as a shop and cycle hire facility.

While some parts of the development have been completed, the hotel was never built.

Builders J&T Gizzi Limited filed the latest application as they claimed it would help to boost the area’s economy.

However, councillors unanimously voted to deny permission at a virtual meeting held this afternoon (Wednesday, 30 September).

It came after Flintshire Counci’s chief planning officer raised concerns over the appearance of the scheme and its impact on the surrounding countryside.

In a report, Andrew Farrow also highlighted a lack of information on measures to protect great crested newts at the site.

He said: “The proposed scheme has the appearance of a dense housing development and not a tourism development due to the scale and density of the layout.

“The site is proposed to be developed up to all of its boundary limits which would necessitate significant landscaping in order to reduce the impact of the development.

“The density of the development and its built up nature creates a sprawl of development across the site, though I acknowledge that some screening would soften the appearance.”

He added: “Whilst opportunities to promote tourism are welcomed, and this includes the benefits this has on the local economy and employment, the location, type and scale of tourist accommodation needs to be appropriate to the characteristics of the site and locality.

“The appraisal evidences that this is not the case, and I therefore recommend accordingly.”

A total of 27 letters of objection were received against the proposals, including concerns the development would be out of keeping with the country park.

Meanwhile, the Welsh Historic Gardens Trust said it would have a negative impact on the appearance of Soughton Hall, a nearby country house which holds Grade II* listed status, along with its parks and gardens.

Cllr Chris Bithell, the local authority’s cabinet member for planning and public protection, supported the refusal of the scheme.

He told fellow planning committee members: “We’re talking about a little holiday village here in effect and that is quite incongruous in terms of size and scale to the surrounding area.

“It will obviously conflict with the setting of the Grade II* listed building and parkland at Soughton Hall.

The scheme previously received some support from the general manager of Northop Golf Club, which is located nearby.

Tony Godden said the creation of the lodges would be a “fantastic benefit” for golfers.

Architects acting on behalf of the developers said in a statement that they felt the original proposals for a 198-bed hotel would not be viable at the site.

They added that a lodge style park would be a more suitable alternative, providing “good quality tourism accommodation”.

But the recommendation to oppose it was also backed by Buckley Pentrobin councillor Mike Peers.

He said: “It detracts from the local area and the level of so-called tourism would saturate the openness of the setting of the park.”

All 13 committee members voted in favour of rejecting permission at the end of the debate.