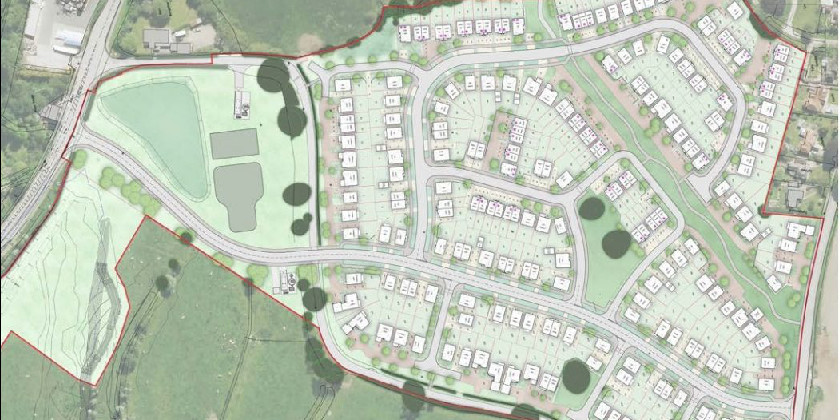 Road safety concerns have been raised after plans were entered for almost 240 new homes on the outskirts of Mold.

Anwyl Homes wants to develop a large area of farming land off Gwernaffield Road by creating a mixture of two-storey houses, bungalows and apartments.

The Ewloe-based company said just under a third of the units would be allocated as affordable housing to meet the needs of local people.

However, a total of 20 objections were received against the scheme for 238 houses as part of a pre-application consultation.

It includes comments from a community councillor who claimed it could lead to more road accidents in the area.

Ruth Appleton, who lives in Gwernaffield, said she was “genuinely dismayed” by the proposals in a response included as part of documents put forward to Flintshire Council by the housing firm.

She said: “At present it is relatively quiet, but the road leading to the villages is seen by some as a race track to get to the crossroads within the village so that they can use adjoining Cadole Road to get to Loggerheads country park or straight through into Pantymymyn and onwards to Cilcain.

“There is a school in Gwernaffield and therefore the likelihood of accident is increased.

“Cadole Road is also seen as a hotspot for accidents, so any addition to further traffic needs consideration.

“The increase of traffic will forever change the relatively peaceful atmosphere not only of these villages, but the surrounding area.

“The reason for moving here was to enjoy village life and not be part of a racetrack.”

Anwyl said it had carried out a “robust” transport assessment looking at the impact of the proposed development on the local road network.

The report states there is no evidence to suggest that the plans would have a negative effect on road safety or the number of accidents in the area.

In the documents, transport consultants said: “The proposals are in general accordance with transport policies, with the application site being accessible by non-car travel modes, such as walking and cycling.

“The site is also accessible by public transport with bus stops on Denbigh Road, linking the site to Mold and its bus station where a vast number of services are available, offering direct services to a range of destinations including Buckley, Chester, Ellesmere Port and Wrexham.”

They added: “The site can be accessed in a safe and efficient manner from two new priority junctions, one off Gwernaffield Road and the other off Denbigh Road.

“The swept path analysis has demonstrated that the site can be adequately serviced and will not give rise to any road or highway safety issues.”

Comments are currently being invited on the scheme on the council’s website with a decision expected to be made at a later date.


Tweets by Deesidedotcom
Wednesday May 25th 17:52