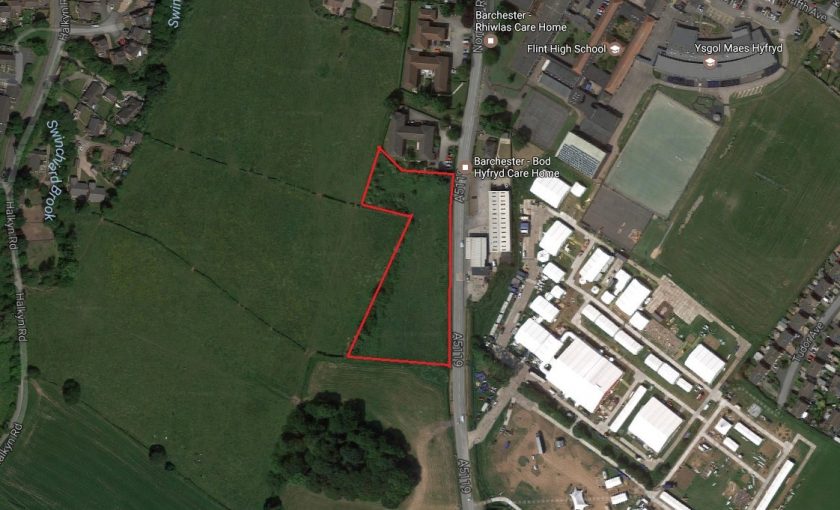 Plans to build a total of 18 new houses on land next to a care home in Flint have been thrown out after being labelled as “premature”.

The site forms part of a wider plot earmarked for 170 houses in Flintshire Council’s Local Development Plan (LDP), which is shortly due to be examined by inspectors.

The local authority’s chief planning officer recommended to councillors that permission for the scheme should be refused ahead of a virtual meeting held today (Wednesday 13 January).

Andrew Farrow said the site should not be developed in a “piecemeal ” fashion and criticised the fact that the scheme had been put forward before the LDP was formally adopted.

Most members of the council’s planning committee agreed with his conclusions, including cabinet member Derek Butler.

He said: “It’s a large site that needs to be seen in a completely rounded way that enables the people of Flint to feel that it has been developed in a manageable, sustainable way in that part of their town.

“We use the word premature quite a lot in planning and it’s a bit like putting the cart before the horse.

“We’re supposed to be looking at the application in front of us today, and we are, but we’re looking at it in the in the knowledge that there is an allocation under the LDP that will deliver a more rounded development for the benefit of the people.

“That is the main reason why this is premature.”

A total of 70 letters of objection were submitted against the plans, despite the developers claiming it would help meet the need for three-bedroom family properties in the town.

Mr Farrow said in his report that the layout was inappropriate and would harm the appearance of the area.

His comments were also supported by Cllr Chris Bithell, the council’s cabinet member for planning.

He said: “Given that the whole site is allocated for development within the LDP, it would make more sense if the site was to be developed in its entirety rather than piecemeal fashion, which will happen if this particular application is approved today.

“That will lead to certain adverse implications in terms of what could otherwise be achieved if the site was determined as a whole.”

Cllr Patrick Heesom spoke in favour of the proposals, which he said should be approved to ensure progress is made at the site.

However, members chose to refuse permission for the plans by 15 votes to one.


Tweets by Deesidedotcom
Wednesday May 25th 16:44