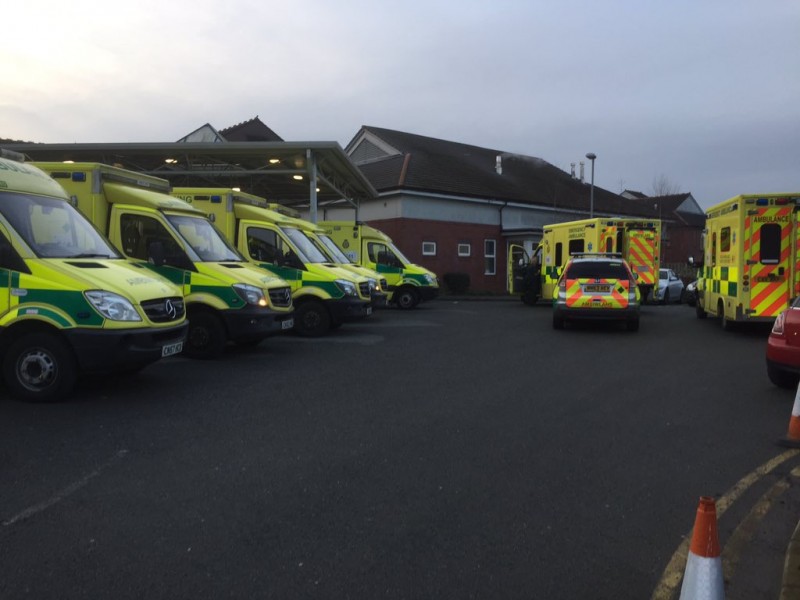 Frontline ambulance staff spent more than 5,000 hours waiting to hand over patients outside busy north Wales hospitals during the last three months, it has been revealed.

A total of 5,233 ambulance hours were lost to handover delays at Wrexham Maelor Hospital, Ysbyty Glan Clwyd and Ysbyty Gwynedd between April and June, as ambulance crews and patients spent the equivalent of 218 days queuing outside emergency departments.

The figures have been released by the Emergency Ambulance Service Committee in the same month that the North East Wales coroner’s office issued two Prevention of Future Deaths notices jointly to Betsi Cadwaladr University Health Board and the Welsh Ambulance Service over delays at the Maelor Hospital.

NHS Wales guidelines state that patients should be handed over from the care of ambulance crews to hospital staff within 15 minutes of their arrival.

However, across the region this only happened in 42.2 per cent of cases and meant ambulance teams were unable to get back out to help other patients in the community on the majority of occasions.

Both Trusts now say they are working together to improve the issue.

Andy Long,  the Welsh Ambulance Service’s area manager for north Wales, said: “Handover delays are of great concern to us and are a symptom of the whole healthcare system being under pressure.
“Delays are not good for anyone, least of all the patient, and do not represent the care we or our hospital colleagues wish to provide.

“Our focus is on working with our colleagues at Betsi Cadwaladr University Health Board to alleviate pressures and keep our resources as free flowing as possible.”

The deaths of both 93-year-old Margaret Megan Evans and 46-year-old Ester Wood were said to be of accidental and natural causes respectively, however Mr Gittins their wait for treatment was of serious concern.
Factors blamed for contributing to the logjam at hospitals include a lack of hospital beds, more elderly patients presenting with serious conditions and the length of time it takes for social care packages to be put in place.

Figures show that Betsi Cadwaldr is currently the worst performing health board in the country when it comes to the number of lost ambulances hours, with Abertawe Bro Morgannwg University Health Board in south west Wales sitting behind it with 3,285 lost hours.

In June Betsi Cadwaladr’s statistics were more than double that of any other individual trust at 1,662.
In response, a spokesman said its hospitals receive significantly more ambulance arrivals than any other health board in Wales, and that the number of crews ready for their next call within 15 minutes after handing over patients is above the national average.

He said: “We have significantly reduced handovers taking more than an hour over the last month, and will continue to work with the Welsh Ambulance Service Trust to continue to make improvements.
“Efforts we are making to improve these rates include increasing our ability to accept patients into our departments, preventing them from waiting in an ambulance, and working with the Welsh Ambulance Service Trust to direct people in need of care to alternative sources of appropriate care, including our minor injuries units.
“We are also looking at how we can better support patients who frequently use our emergency departments, and how we can provide them with alternative ways of accessing the care they require.”