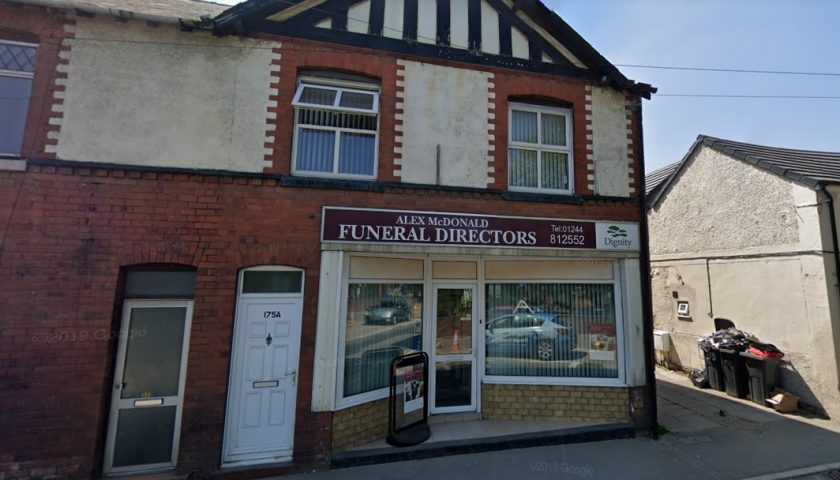 A former funeral director in Connah’s Quay could be converted to allow the extension of a house in multiple occupation (HMO).

Alex McDonald Funeral Directors on the town’s High Street closed its doors in early 2021 and the ground floor of the building has stood empty ever since.

With the owner of the property said to have been unsuccessful in attempts to re-let the unit, plans have now been submitted to turn it into bedsit accommodation.

The first floor and loft of the building already form part of a five-bedroom, although the loft conversion was carried out without planning permission in 2016.

The proposals seek retrospective approval for the two bedrooms in the loft, as well as to create three further bedrooms and a shared kitchen and shower room within the former funeral directors.

According to documents entered with Flintshire Council, it would increase the total number of bedrooms within the property to eight.

In a letter to the local authority, architect Adrian Waters said: “My client purchased the property in 2004 with the existing use of the first floor as an HMO.

“This being more than ten years, hence it is understood that this is now an accepted use.

“He went on to convert the loft into additional HMO bedsits in 2016 but due to an oversight did not firstly obtain planning consent for the expansion.

“The ground floor of the building was let to an undertaker who vacated the premises in early 2021 since when the applicant has been unable to re-let the space.

“This application is to provide much needed bedsit accommodation on the ground floor which will share the existing entrance and hallway and provide additional shared facilities.”

He added: “Naturally, my client and I look forward to receiving consent within the statutory period for assessment.

“But should you for some reason be considering rejecting the application or placing conditions on a consent, may I request that prior to issuing such notice you contact me to see if there are adjustments that could be made to the proposal that would enable an unencumbered consent.”

It’s expected the council will make a decision on the proposals at a later date.