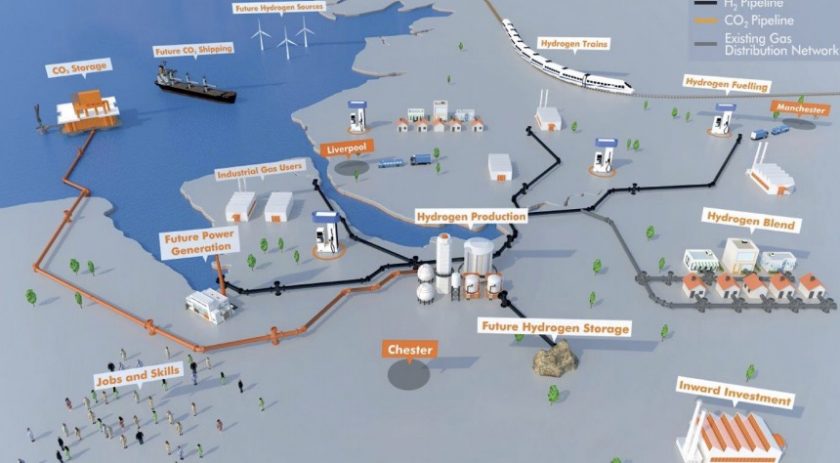 Households across Flintshire have been receiving letters this week outlining proposals for a huge carbon capture scheme that would see a pipeline built through Deeside to carry waste carbon offshore.

A consultation has begun on the first stage of a project which will eventually see clean hydrogen produced to replace the fossil fuels used by industry, transport and homes and the capture of carbon dioxide (CO₂) emissions produced by energy-intensive industries.

Phase one of the ambitious plan will be to develop a pipeline to transport CO2 away from North West and North Wales industrial areas through Deeside and to store it in depleted gas reservoirs in Liverpool Bay.

The scheme – called HyNet North West – is a collaboration of organisations which includes Liverpool Bay CCS Ltd, a subsidiary of Eni UK Ltd, the existing owner and operator of the Liverpool Bay gas fields.

The mix of hydrogen production and carbon capture and storage (CCS) has the potential to cut the region’s carbon emissions by 25% in just five years-  the same as taking over four million cars off the road, according to HyNet.

UK Government has said the decarbonising of industrial clusters are an essential part of “the journey to net zero greenhouse gas emissions by 2050, as described in its 10 Point Plan for a Green Industrial Revolution.”

HyNet claims the project will “help retain existing jobs and create 6,000 more permanent jobs in the region, and many more during construction and across the wider UK.”

The proposed CO2 pipeline compromises of two parts: the construction of a new underground pipeline, which then connects with an existing natural gas pipeline that will be repurposed so that it can transport CO2.

The new CO2 pipeline will transport CO2 produced and captured from existing industrial premises in the Ince and Stanlow area.

It will also transport CO2 from a new low-carbon hydrogen production plant at Stanlow.

From here it will run south west through Cheshire and into Flintshire, connecting into the existing repurposed pipeline at a location near Flint.

The existing onshore pipeline that will be repurposed runs from a location near the existing Connah’s Quay Power Station, and travels west through Flintshire to the existing Point of Ayr Gas Terminal in Talacre.

The pipeline then runs underwater from the shoreline until it connects to the depleted gas reservoir where the CO2 will be injected. 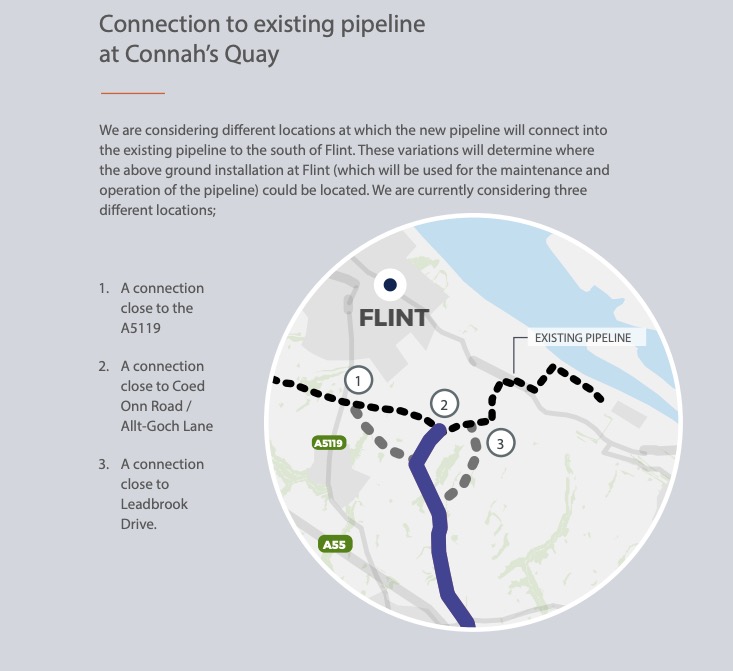 Signs have been cropping up on land around proposed pipeline routes asking for landowners to contact the company.

While there will be concerns around the environmental impact of building a pipeline, HyNet says it will be buried underground at a depth of 1.2 metres or lower.

“Any hedges, fences or other ground features would be replanted or replaced after construction.”

“Once constructed, you will not be able to see the pipeline although some above-ground marker posts will be visible.”

Some above-ground installations will be used for the maintenance and operation of the pipeline these include sites where the pipeline will connect into existing industries.

In some locations along the pipeline, installations called ‘block valves’ will be required, one is earmarked for Connah’s Quay

HyNet says it is “currently in the stage of identifying a suitable route for the new CO2 pipeline to follow.”

Two options G and I are being considered for the consultation.

Both options share some similarities, “but also have some important differences for consideration.” Hynet says

Based on detailed analysis, “the current favoured route is Option G.”

HyNet said, “We identified potential routes through a staged approach of research and studies.”

“We firstly considered wide ‘corridors’ (broad areas of land) where the pipeline could be located.”

“We then assessed various options within these corridors, scoring them against a set of criteria, to identify two preferred routes.”

“The final stage of our route appraisal process will be to select a single route for which we will be seeking consent.”

“We will present our preferred route at a further public consultation later in the process to seek your feedback on our more detailed proposals.”

As the newbuild CO 2 pipeline exceeds 16km in length, it is classed as a Nationally Significant Infrastructure Project (NSIP).

That means that HyNet will need to apply to obtain a Development Consent Order (DCO) to be able to progress the project.

It is the role of the Secretary of State for Business, Energy and Industrial Strategy to make the final decision on whether to grant or refuse development consent forthe CO 2 pipeline project. 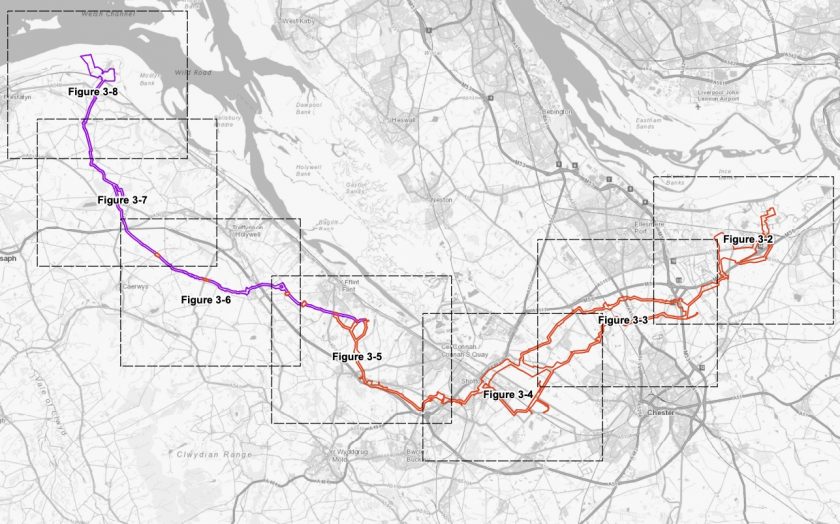 David Parkin, Director of HyNet North West said: “This is the first step in our exciting plans to develop a pipeline to safely transport carbon dioxide (CO2) away from industrial areas to be permanently stored under the seabed.”

“The project has the potential to help to decarbonise one of the UK’s largest industrial clusters and, by helping local industry to reduce their carbon emissions, will play its part in ensuring organisations remain viable as the UK moves to net zero emissions.”

“This is the chance for those living and working within the North West and North Wales to support the decarbonisation of their region.”

“The first part of the infrastructure we will need is a pipeline which will remove CO2 from regional industry.”

“We are inviting local communities to give their initial feedback at this early planning stage for the pipeline, and the overall project, from 9 June.”

David Parkin continues: “The mix of local industrial experience, and cutting-edge science, provides the perfect base from which to create a hotspot for clean growth and innovation, providing a wide range of training and skills opportunities for local people, and creating over 6,000 local jobs.”

“All this while making the region – and eventually the entire country – cleaner, greener and safer for future generations.”

“We’re delighted to be taking this first public step in our plans to bring the region to the forefront of clean energy innovation.”

“By reaching out to and hearing what local people, business and industry have to say about the project, and bringing them along for the journey, we can deliver something that is not only truly innovative but a testament to the communities who will benefit from it for years to come.”

HyNet says it plans to submit a DCO application in 2022, it will also seek planning approval from Flintshire County Council for potential works to modify the existing pipeline and the facilities at the Point of Ayr Gas Terminal.

Earlier this year Hanson Cement, the operator of the Padeswood site and a consortium partner of the HyNet North West project, was given the green light to carry out a carbon capture and storage feasibility study.

The study will provide a “clear design basis and cost estimate” for a carbon capture plant and connection to the planned HyNet North West CO2 transport and storage system.

The consultation is open now until 11th July, more information can be found on www.hynethub.co.uk

There will be three public webinars on: