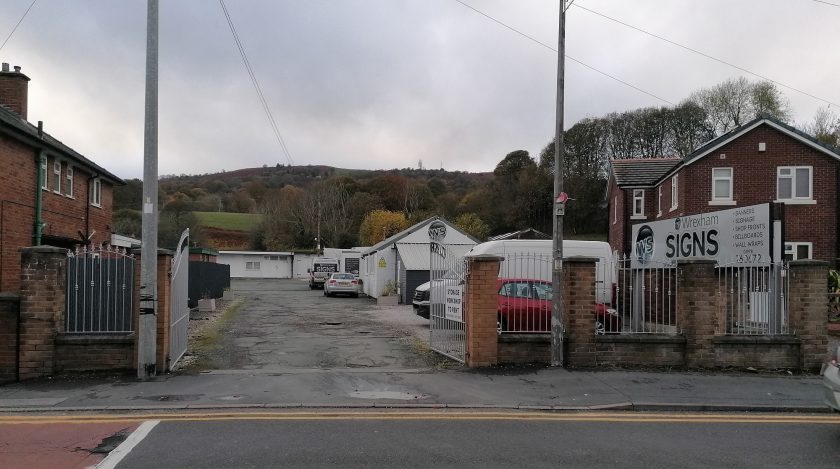 Plans to build houses in a village in Flintshire have been approved despite concerns over road safety.

Councillors met today (Wednesday, 24 November) to discuss proposals to create up to seven new homes on land at Pugh’s Yard in Caergwrle.

The site on Hawarden Road is currently used as a base by sign-making firm Wrexham Signs Ltd.

The company applied to demolish the industrial buildings in March to make room for the development.

Flintshire Council’s chief planning officer recommended that permission should be granted for the scheme.

However, one community leader raised concerns over the scale of the development and impact on road safety.

Speaking at the planning committee meeting, Hope councillor Gladys Healey said: “My only observation here is that it’s seven houses, each one with two cars, which will see 14 cars coming out onto that main road.

“It worries me because if you look at the road map and where it is, you will see it’s right on a bend.

“If you look on the opposite side, there is quite a few houses at the bottom that come out onto that road as well.

“It’s a dangerous road and seven houses is too much.”

Chief planning officer Andrew Farrow said although the proposals would result in the loss of land designated for employment use, the reduction would not be “unacceptable”.

In a report to planning committee members, he added the houses would fit in well with the surrounding area.

The council’s highways department raised no objections against the application.

A statement by an agent acting for the company behind the scheme was read out at the meeting to support it.

Addressing the road safety issue, Dafydd Edwards said: “The site does benefit from an existing access point off the highway, which currently serves the commercial use on the site.

“A development of the nature we are proposing will see improvements made to the existing access point to the site in conjunction with the requirements made by the highway department.”

The proposals were backed by Cllr Chris Bithell, Flintshire’s cabinet member for planning.

He said: “Residential development will be quite fitting this particular location.

“The site is in a sustainable location and is well-connected by nearby train services.

“It is also close to the existing shops and schools etc. in that particular locality.”

The plans were approved by 13 votes to one at the end of the debate.