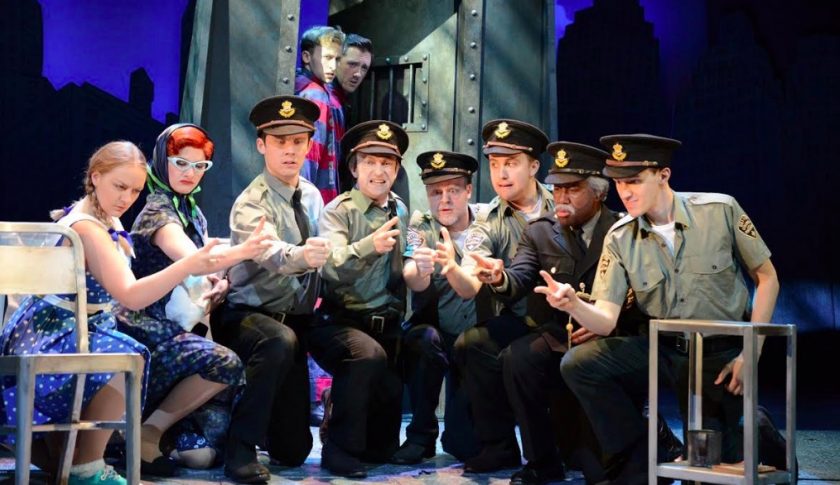 Following the sell-out success of it comedy The Play That Goes Wrong, Mischief Theatre’s Olivier Award-nominated West End smash hit The Comedy About A Bank Robbery opens the new spring season at Storyhouse in Chester.

The show’s UK and Ireland Tour opened in Birmingham in August 2018, and will now continue touring until early June 2019.

The Comedy About A Bank Robbery comes to Storyhouse from Tuesday 29 January to Saturday 2 February 2019.

Now booking into its third year at the Criterion Theatre in London, this smash-and-grab hit is a fast and fabulous comedy caper, hailed the funniest show in the West End!

Set in the Summer of 1958. Minneapolis City Bank has been entrusted with a priceless diamond. An escaped convict is set on pocketing the gem with the help of his screwball side-kick, trickster girlfriend…and the maintenance man.

With mistaken identities, love triangles and hidden agendas, even the most reputable can’t be trusted. In a town where everyone’s a crook, who will end up bagging the jewel?

Mischief Theatre was founded in 2008 by a group of graduates of The London Academy of Music and Dramatic Art (LAMDA).

Starting as an improvised theatre group on the London and Edinburgh fringes, they have grown into one of the UK’s leading theatre companies, winning the Olivier Award for Best New Comedy for The Play That Goes Wrong, and licensing their productions worldwide.