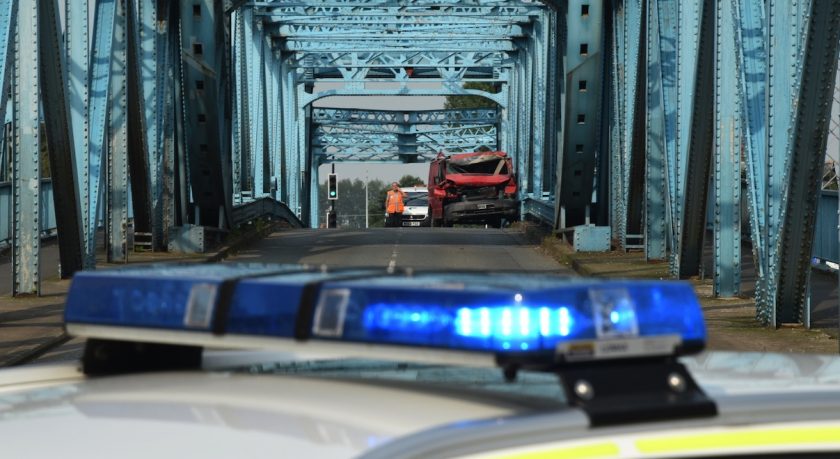 Update: The B5441 Welsh Road in Queesferry was closed this afternoon after a vehicle tranporter collided with the Jubilee Bridge which spans the River Deesode between Queensferry and Garden City.

A Transit Van which was being transported on the top level of the lorry hit part of the ‘blue bridge’ and crashed onto the road.

Police closed the road for several hours while the vehicle was recovered and bridge safety inspection work was carried out.

Fortunately nobody was injured as a result of the collision.

Paul Wylie was near the scene shortly after the incident and sent these photographs in to Deeside.com

Earlier report: Police have closed Welsh Road either side of the Blue Bridge in Queensferry after a van fell from a vehicle transporter.

The red Transit van has been badly damaged following the incident which happened just after 3pm.

Latest traffic report for the area states: “Bridge closed due to accident, a van that has fallen from a recovery truck involved on Jubilee Bridge both ways between Hawarden Castle Hotel and The Queensferry Hotel. The bridge is going to be closed for the next few hours for inspection work. The accident happened around 15:10.”

For safety reasons have to wait for a structural engineer to check the bridge it has been struck quite hard. They should be there about 5.30 pm.

[Thanks to Sharl Jones for the photos]