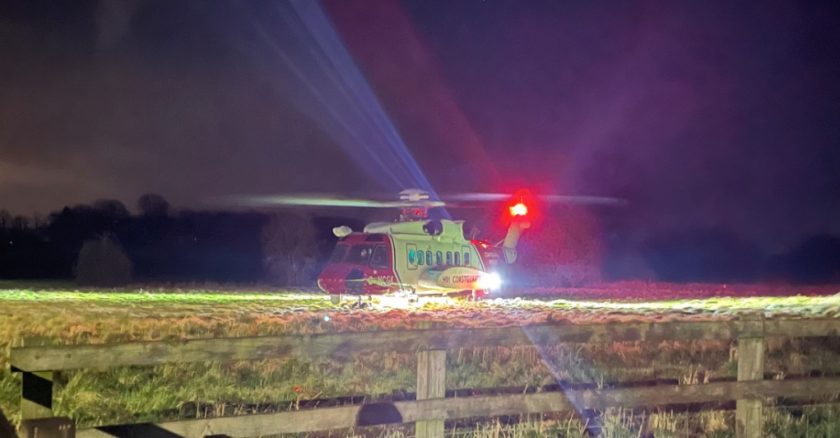 This was the moment when HM Coastguard’s helicopter battled against the elements to rescue three people including a child, caught up in the floods near Rossett.

The HM Coastguard search and rescue helicopter from Caernarfon was called as part of the wider emergency response to floods across the area alongside North Wales Police, the Welsh Ambulance Service and the Fire and Rescue Service and was seen on tracking systems conducting the operation just after midnight today.

High water had forced the three out of their homes after the banks of the River Dee burst following heavy rainfall.

The Aeronautical Rescue Coordination Centre, part of HM Coastguard, took the request from other emergency services after it became clear the people could not be reached by land.

Chief Pilot Dave Kenyon said: “These were very challenging conditions both in terms of the weather and also where the people were.”

“They were on a ledge by the roof, with debris falling and being washed away all around them”

“We’re delighted that all three were got out safe and well and handed into the care of the other emergency services.”

The video released by the Coastguard is below:

North Wales Police’s Intercept Team helped on the ground with the operation, publishing the top picture, saying “We were called to assist in the Holt area last night with the on-going efforts from the emergency services after flood waters were still present.”

“We assisted North Wales Fire and Rescue Service with an incident which also involved the attendance of rescue 936 Coastguard helicopter from Caernarfon.”

“We thank you for your patience and understanding and are pleased to say everyone involved was safe and well.”

“Some of the team are back in the area today alongside other agencies assisting with the efforts, stay safe everyone.”