A documentary programme that reveals the inside story of how the giant wings of the Airbus A380 ‘superjumbo’ make their first journey has been sold to be shown in 50 countries worldwide.

The global co-production was led by North Wales television company, Cwmni Da, who are also celebrating after the series about the world’s tides won a major international award

Llanw (Tide) was honoured with the Silver Dragon Award at the prestigious China International Congress of Science and Education Producers in Beijing where big names like National Geographic were also vying for glory.

The double dose of good news has come at a momentous time for Caernarfon-based Cwmni Da which is in its first year as an Employee Owned Company.

In their lifetime, the Superjumbo’s wings made by Airbus at Broughton will carry the plane over 52 million miles in a 30-year flying career but first they have to navigate a tricky 18 miles on a barge on the River Dee.

The international audience will see there is a precise window of opportunity for that voyage as the incoming tide lifts the barge clear of the Dee’s shifting sandbanks but not so high as to make its four low bridges impassable.

Each wing is 45 metres long, 12 metres wide and weighs 35 tons the show charts that voyage. 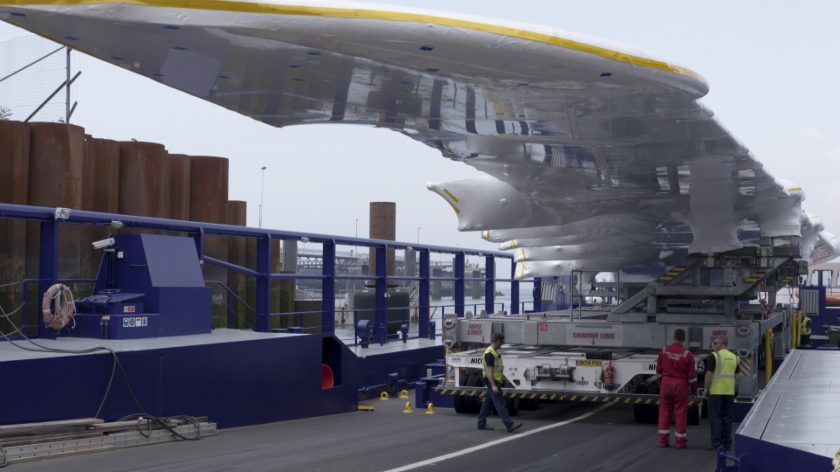 To make the ambitious £600,000 series which was shown on S4C over the summer, Cwmni Da sent crews to four continents, taking in 10 countries and the Arctic.

The partnership also included TG4 in the Republic of Ireland, BBC Northern Ireland, MG Alba in Scotland and the LIC, the largest independent television production company in China.

Distributor Sky Vision also invested in the project via a Welsh Government fund which they administer.

The Welsh, Irish Gaelic, Scottish Gaelic and English versions of the series were  edited at Cwmni Da’s state-of-the-art production centre in Caernarfon.

The series is being distributed in Greater China, Hong Kong, Macau and Taiwan by LIC and Sky Vision and it’s now been sold other broadcasters in three continents, including Africa where it will be seen in more than 40 countries.

Dylan Huws, the managing director of Cwmni Da, said: “I’m absolutely thrilled that Llanw has won this hugely prestigious award from China. It’s a feather in our cap and it gives us a great sense of pride.

“It’s an award for everybody who has contributed to the series, the backing that we got from the broadcasters and the faith they showed in us to carry this through, and now our production partners in Scotland, Ireland and obviously over in China.

“We were competing with some of the big boys of global television, huge companies like National Geographic.

“It was particularly appropriate that we won the Silver Dragon Award because one of the episodes feature the Silver Dragon Bore in Hangzhou Bay in China which was totally amazing.  There were 100,000 people on the banks of the river celebrating the annual Harvest Moon festival and witnessing the arrival of the tidal bore which travels at 20 mph and is a bit like a tsunami coming upriver.

“I think what appealed to the judges was the originality in the subject matter and the way that we approached it  by illustrating human interest stories and showing how the tide affected people.

“I think it’s that human angle that might have made the difference, that and the fact we filmed in spectacular places around the world.

“The challenge with doing these international co-productions is actually trying to tailor it so that your home audience feels that it’s bespoke for them. I think we managed to do that.

“The scale of the production was hugely ambitious. We filmed in almost all the continents, in 10  different countries.

“We have really good working relationships with our co-production partners, and everybody went that extra mile to make sure that the end product is what it is today, which is high quality content.

“In the process we’ve forged some really good partnerships with broadcasters which will stand us in good stead when it comes to other productions in future.

“The Tide project was I think the first time that we got all the Celtic broadcasters together.

“It helped us to create a new kind of partnership model and we’re already discussing  the possibility of follow up series with the same partners. Watch this space.”