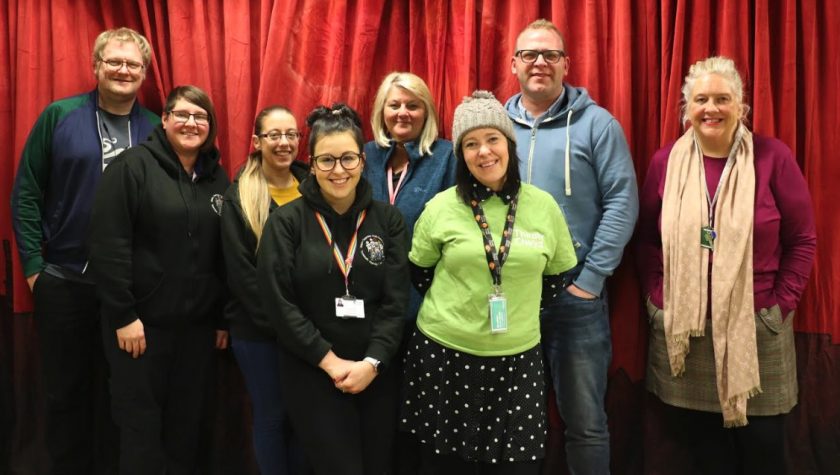 Members of Theatr Clwyd’s team have been shortlisted in the Wales Creative & Cultural Skills Awards.

‘WeMindTheGap’ was set up by Wrexham based Moneypenny to provide missing support and opportunity for young women.

Theatr Clwyd recognised the huge potential in Serena and working in partnership with Flintshire Apprenticeship Scheme, managed to secure funds for Serena to work with them for a full year, which then developed into a further six months.

Serena said: “I feel so grateful and excited to have been nominated. It’s so lovely to be considered for Wales Creative Learner of the Year.”

In addition to Serena’s nomination, Gwenno Jones of Theatr Clwyd and Angela Rogers of Engage Cymru have been jointly nominated for Wales Creative Collaboration of the Year Award.

Engage Cymru and Theatr Clwyd collaborated to devise a 5-month Arts Award accredited project ‘Creative Potential’ aimed at some of the most vulnerable young people in Flintshire, including young offenders and those at high risk of offending.

ten young people were engaged in the project aimed at increasing their knowledge about the arts, supporting them to develop practical creative skills, as well inspiring them to consider further training or employment in the creative industries.

The project focussed strongly on developing participants self-esteem and confidence.

The young people participated in ‘behind the scenes’ tours – learning from theater staff, volunteers and industry experts about individual career paths.

The ten youngsters will be supported to gain an Arts Award – a nationally recognised arts qualification inspiring them to think positively about their futures.

Theatr Clwyd’s Artistic Director Tamara Harvey said: “From the moment Serena came to us for her WeMindTheGap placement, it was clear that she was a beautifully inventive young artist.

We’ve been lucky to have her with us, and equally lucky to have the young people of Creative Potential with us under Gwenno and Angela’s guidance. It’s wonderful that Serena’s creativity and the inspiring collaboration with Engage Cymru have been recognised with this nomination.”

Serena and Gwenno will find out if they have won an award at the awards ceremony in Cardiff on Wednesday 29 January. Everyone at Theatr Clwyd wishes them the very best of luck!