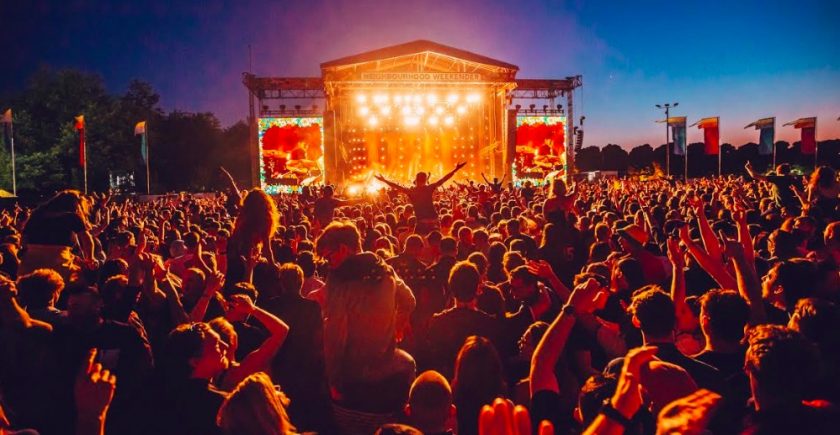 A television production student got the chance to go behind the scenes at a major music festival – thanks to the contacts she has built while on her course.

Lucy Davey, who lives in Llansantffraid-ym-Mechain in Powys, worked alongside the Electrobank  Media team at this year’s Neighbourhood Weekender festival in Warrington.

The team was led by Glyndwr lecturer Glenn Hanstock, who has headed the award-winning production company for the past six years

With the help of Lucy and a group of other Glyndwr students Electrobank produced a series of promotional films for the festival – which is set to return again in 2020.

The experience was a new one for Lucy, 37, who decided to retrain in television production after a career in pharmacy – and who had never been to a major festival before.

She said: “It was my very first time at a festival. Working at one you experience it very differently – you are listening to the music, but it’s secondary, you are concentrating on what you need to do next.

At events like this you only have once chance to get the shot.

“There were big acts like George Ezra, Richard Ashcroft and the Charlatans performing –you did get too see them up close while you filmed – but we were there to work.

“I was a runner – I worked with Glenn for the two days – helping move equipment, checking things like batteries were charged, and helping to make sure he was able to move through the crowd when he was filming without members of the public getting in the way.

“That was quite important as a task – there was a specific shot we were trying to capture, a hyperlapse – it’s like a timelapse but instead of the camera staying static, it moves.

The footage is really fast, with people moving in and out of the shot – my job was to make sure that Glenn could move through the crowd easily and ensure that shot worked.

“We worked together really well during the day – and by the second day, we got to the point where Glenn could look at me while filming and I’d know what needed to be done.

“ I had the time schedule when working at the festival so I kept reminding him of the time and where the acts we needed to film would be performing.

Throughout the day I was contacting the other cameramen and runners to let them know where Glenn wanted them to be to ensure all the key acts were covered – following the media brief supplied by SJM Concerts, the company who commissioned the shoot.”

Lucy’s festival filming is just one of the experiences she has been able to enjoy while studying at Glyndwr – she has also worked alongside daytime television stalwart David Dickinson as he filmed an episode of his Real Deal programme at Llangollen.

Lucy is now working to build her portfolio in television production – and is using the extensive industry contacts of Glyndwr’s staff to help find opportunities.

She added: “I’ve been speaking with Dan and Glenn who lecture here – they both have industry knowledge and contacts and have been really helpful. I’ve set up a profile on an industry site and am out there looking – I know you start from the bottom in the industry, but it’s something I have always wanted to do.

I’m happy being a runner if it means that I’m in the building, stood by camera operators and floor managers – it doesn’t feel like work.

“I’m currently employed as a pharmacy technician in the hospital in Shrewsbury but I decided that I wanted to do this and to work in the media.

“I looked into courses, came to Glyndwr for an Open Day and it all just felt right when I was shown around. I looked at the TV studio and got goosebumps – I just wanted to come here!

“It was a big step, but I am so happy I have done it – it is the best decision I’ve made.”

At large-scale events like this, runners are an integral part of the production crew and this is the role that provides the vast majority of graduates their first career position in the media industry.

As a lecturer it’s a very proud moment to see your students becoming industry professionals in front of your eyes.”

“Working on a live event production is a very different experience to working in the studio – and it’s essential for our students to get hands-on experience like this.

It’s something the Creative Industries Team strongly encourage at Glyndwr – it means students like Lucy get the opportunity to enjoy experiences such as this- allowing them to build a professional CV, which is key in helping them secure employment after graduating.”

One of the videos Lucy and the team created can be seen here: https://youtu.be/PUgmNPlsT04