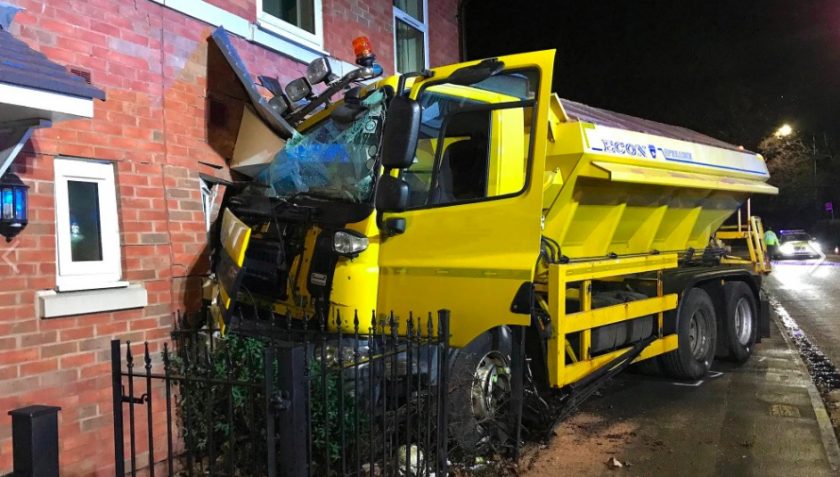 “At approximately 1am today, Monday 17 December, police were called to reports of a collision on the A56 Chester Road, Helsby.

Officers attended the scene and found that a gritter had collided with house near to Lower Robin Hood Lane.

The driver of the vehicle was taken to hospital as a precautionary measure: although he is not believed to have sustained any serious injuries.

All occupants of the building were safe and well; they have been temporarily moved to alternative accommodation with friends and family.

As a result of the collision a full closure is currently in place on the A56 in Helsby; the closure is expected to remain in place for several hours, diversions are in place via the M56.

Anyone with any information in relation to the collision is asked to contact Cheshire Police on 101 quoting IML 271042.”

“Firefighters from Ellesmere Port Fire Station andPowey Lane Fire Station were called to a road traffic collision on A56 Chester Road in Helsby in the early hours of this morning after a gritter collided with a house. Crews released the driver who was handed to the care of paramedics.

Earlier report: Traffic is reported to be heavier than normal on M56 heading away from Deeside (Eastbound) around J14 A5117 Hapsford.

Drivers hoping to travel along the A56 Chester Road in Helsby are having to use the M56 due to the roads closure.

A lorry has hit a house close to the A56 Chester Road and the road is closed both ways from Robin Hood Lane to the Community Centre.

“The lorry crashed into a new build house around 05:30 this morning near to Tesco, the road is expected to remain closed through lunchtime whilst checks to the structural integrity of the house are conducted.”

*Highway disruption* RTC causing road closure A56 Chester Road Helsby near to Robin Hood Lane – anticipating will be closed for most of the morning. Please avoid the area.

There is also heavy traffic on the M53, one lane closed and queueing traffic due to accident on Southbound from J5 A41 New Chester Road (Eastham) to J6 West Road (Hooton).

Congestion to J4 (Bebington). Lane two (of two) is closed.