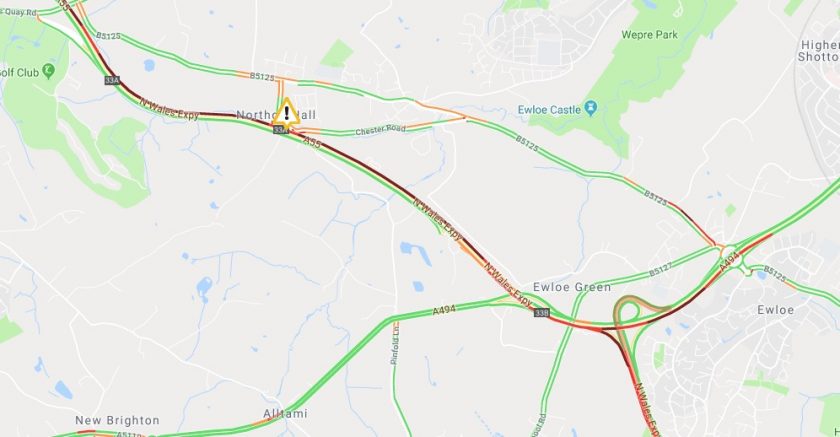 Police launch witness appeal following serious collision on the A55 at Northop.

Police are appealing for witnesses following a serious road traffic collision on the A55 at Northop, which has resulted in two people being taken to hospital.

The male driver suffered serious injuries while the female passenger was taken to hospital with what are believed to be minor injuries.

“The Qashqai was travelling eastbound on the A55 when it veered off the road into a field. We are appealing to anyone who may have witnessed the collision or who may have seen the vehicle being driven prior to the incident to contact police.”

Anyone with any information or dashcam footage relating to the incident is urged to call the Roads Policing Unit on 101 quoting reference W110484.

“One lane closed and queueing traffic due to serious accident, one vehicle involved on A55 Eastbound from J33 A5119 Northop Road (Northop, Northop) to J33B A494 (Ewloe, Ewloe Green).

Congestion to J32A (Pentre Halkyn. Travel time is 30 minutes. Lane one (Of two) is closed and Traffic Wales advise this may be closed for some time.

Queueing traffic due to people slowing to look at accident on the opposite side on A55 Westbound at J33B A494 (Ewloe). Congestion to J35 (Dobshill) also causing delays on the A494 Southbound.”

Contrary to previous reports suggesting the car involved in the accident was on its roof @wishnwash1 has sent us a tweet saying:

“I witnessed this accident, elderly couple veered off the road, car was stuck in a ditch upright. both were injured but hopefully not serious.”

Steve got in touch to say: “Those using Northop Hall as a diversion will find a very long queue all the way to Ewloe so that isn’t much better either. That has built up in the last 15 minutes.”

A map of the current queues as of 11am on the A55 east and westbound also effecting the A494 – accident took place shortly before 10am. 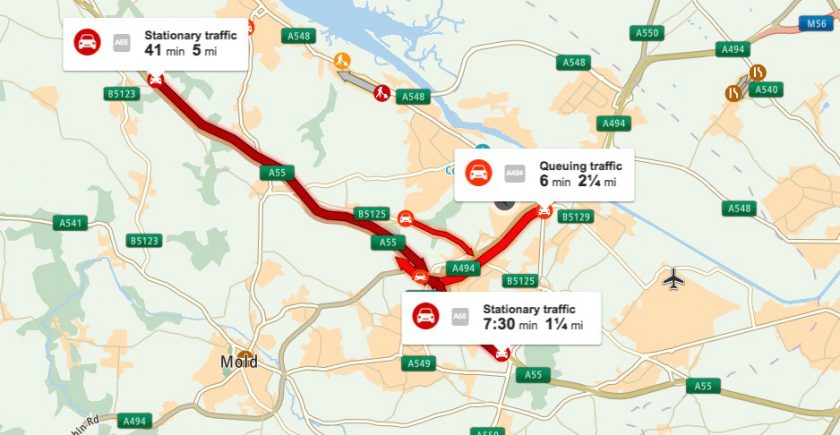 Emergency services including the fire service and paramedics are in attendance – Traffic Wales have called it a ‘serious accident’ and advised  the lane closure may be in place for some time.

Commenting on the A55 Facebook group Peter said: “Lots of sirens in the last few minutes past the Northop Hall services.”

While Rebecca said: “A55 eastbound just before Chester bend turn off queues forming a car has gone on its roof in the bushes on the side of the road emergency services just arriving and shutting road down to one lane.”

Sam said the incident is “opposite the holiday Inn, going eastbound. The traffic is backing up heavily now, avoid if you can. Fire engines trying to fight through the traffic thats already heavy to get to the scene. (were travelling in the opposite direction). Hope everyone involved is okay.”

The latest traffic report for the area states:

“One lane closed and queueing traffic due to accident, a car involved on A55 Eastbound from J33 A5119 Northop Road (Northop, Northop) to J33B A494 (Ewloe, Ewloe Green). Lane one (Of two) is closed and Traffic Wales advise this may be closed for some time.”

More as and when…