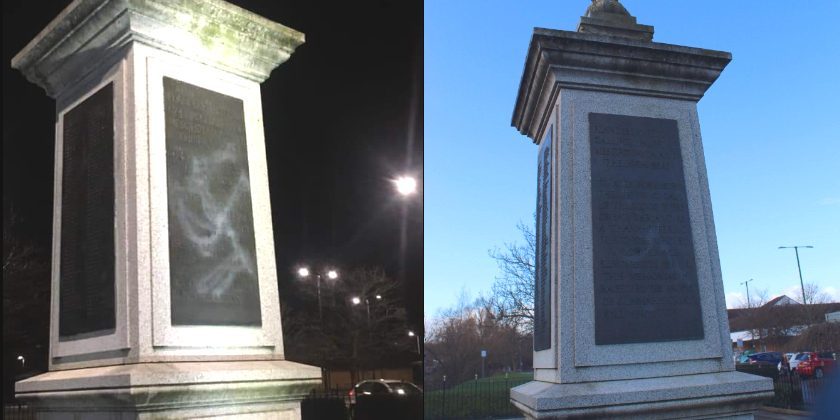 It was the Leader of the Opposition, Paul Davies AM’s (Con, Preseli Pembs.) turn to lead this week’s short debate at the Senedd on the subject of protection for war memorials

Recalling several acts of vandalism against war memorials in Connah’s Quay, Swansea and Bangor over the last year, Paul Davies said war memorials were coming under increased threat. Some memorials have even been targeted for scrap metal, with UV-detectable smart water used to trace stolen memorials.

The Historic Environment Act 2016 contains no specific protections for war memorials and the only existing legislation dates back to 1923. He hoped the Welsh Government will commit to reviewing legislation on memorials – something he’s calls for for several years.

“I’d like to once again put it to the Welsh Government that there should be a statutory duty on local authorities to protect our war memorials. As I said in 2012, this would mean that the legal duty would require local authorities across Wales to ensure that war memorials in their areas are maintained. We know that the War Memorials Act 1923 permits local authorities to use public money for the maintenance of memorials, but councils are under no obligation to do so. This would involve ensuring that each local authority, working closely with community groups and organisations, have a specific custodian whose job it would be to identify and preserve war memorials in their areas.”
– Leader of the Opposition, Paul Davies AM

Joyce Watson AM (Lab, Mid & West Wales) offered her congratulations to Patti Flynn for a 26-year campaign for a memorial to ethnic minority veterans, which was recently installed at the National War Memorial in Cardiff.

Relationship with War Memorials Trust “to be strengthened”

The Welsh Government have shown they care for memorials, with £230,000 of grants awarded to 40 different memorials of all kinds as part of commemorations of the First World War. In addition, £32,000 is spent maintaining Welsh memorials in Flanders and Memetz Wood.

In March people were angered and disgusted after mindless vandals sprayed swastika graffiti on Connah’s Quay and Shotton War Memorial.

The graffiti was daubed on the main road facing side of the memorial across a brass plate commemorating service personnel who died in wars and conflicts since the First World War.

Shotton and Connah’s Quay Interservices Committee Vice Chair Cllr Sean Bibby called the graffiti a “disgusting slur on our war dead especially given how many men on who are mentioned there paid the ultimate sacrifice to defeat fascism and defend freedom and democracy.”