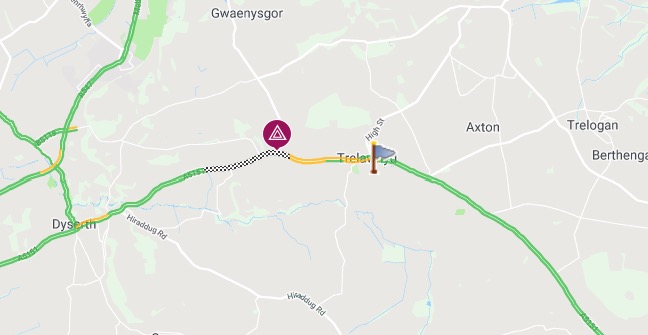 A5151 in Flintshire reopens following earlier closure due to a collision

Update: The A5151 in Trelawnyd has reopened following earlier closure due to a collision.

The Welsh Ambulance Service confirmed it had attended and one person was treated at the scene.

We responded with one emergency ambulance and one patient was treated at the scene.”

Earlier Report: Drivers are being asked to avoid a section of the A5151 in Flintshire following a collision.

Police have said the A5151 in Trelawnyd near the turn for Gwaenysgor is “completely blocked” following a road traffic collision involving up to three cars.

Emergency Services including the fire service are currently at the scene.

Police have asked drivers to avoid the area and use an alternative route.

“Road closed and queueing traffic due to accident, three vehicles involved on A5151 London Road both ways near the turn for Gwaenysgor. Affecting traffic between Dyserth and Lloc.”