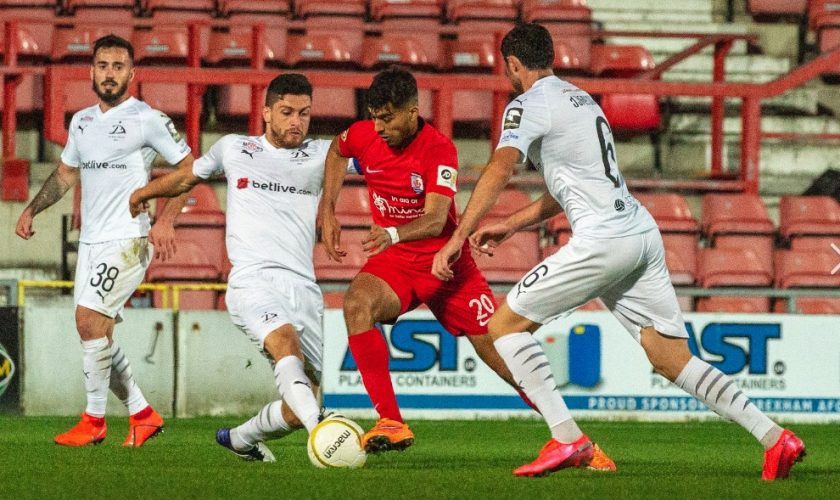 North Wales Police has said they are “aware of the public concern” around Connah’s Quay Nomads Europa League match against Dinamo Tbilisi in Wrexham last night.

Following the match – which Nomads lost 1-0 after conceding a 97th-minute penalty – Morrison said they “had to turn a blind eye” to players who turned up feeling unwell.

In an interview with media outlets after the game, Morrison said: “Three lads have turned up tonight and they’re not well.

And it’s like ‘lads, I don’t want to hear it. I can’t hear it tonight that you’re ill… let’s just get through it’.

Nomads have said Morrison’s comments have been “misconstrued by many” to mean the club we ignored COVID-19 regulations.”

North Wales Police have said: “We are aware of the public concern around the Connah’s Quay Nomads football match played yesterday in Wrexham.

We have been working closely with partners in the local authority, the Football Association of Wales and Public Health Wales to ensure the matter in fully investigated and appropriate action is taken to maintain and secure public safety.

Our colleagues in Public Health Wales will lead this work and NWP will continue to support them in any way we can.”

“On 16 September Public Health Wales was asked for advice by Connah’s Quay Nomads following notification of three positive cases in the players ahead of their match with Dinamo Tbilisi.

“Our advice was consistent with the national guidance, namely that as long as Covid-positive players and their contacts were self-isolating, and social distancing had been observed, the decision of whether the football match should go ahead was up to the football authorities.

“Our assessment of risk and subsequent advice was based on information supplied to Public Health Wales by Connah’s Quay Nomads along with assurances that our advice would be implemented.

“We urge all people who have symptoms of COVID to self-isolate, not attend workplaces, and to seek testing.”

During the Welsh Government daily briefing today, First Minister Mark Drakeford was asked by Channel 4 News if there should be a further investigation, he replied:

“I think it probably does. We’ve been in contact with the FAW this morning. They are going to investigate, they’re going to establish the facts.”

“I’ve seen the additional statement put out by Connah’s Quay today correcting, as they would see it, an impression that was given overnight. Nevertheless, I think it’s important that the facts are established.”

“I’ve been dealing this week with requests from other football clubs in Wales for us to allow a return of fans to matches.

I’m sympathetic to that if it can be done in the right way, but if it’s going to be done, it’s got to be done on the basis that the authorities that are responsible for the running of sports clubs in Wales who give undertakings, that we can all have confidence that those undertakings will be honoured.”