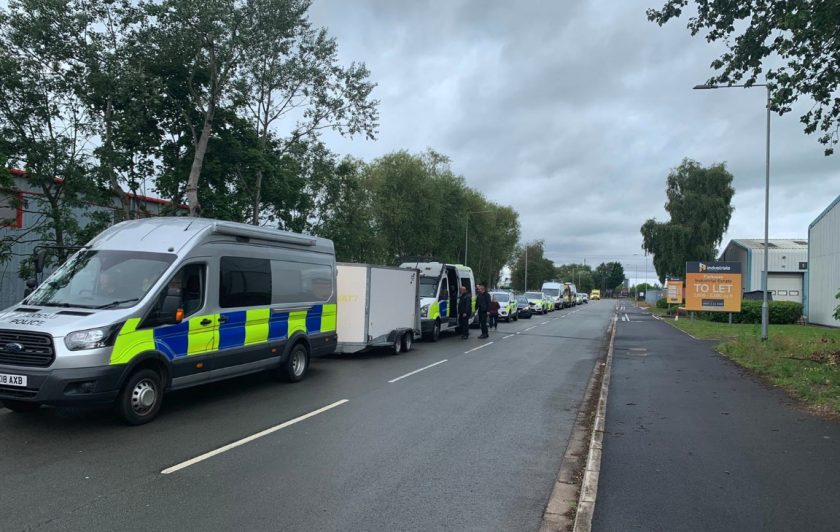 Police have raided a property in Sealand as part of an international law enforcement operation targeting the commercial production of illegal drugs.

Officers from North Wales Police were joined by the National Crime Agency (NCA) and the North West Regional Organised Crime Unit (NWROCU) in the operation today which saw equipment and chemicals connected to the commercial production of illegal drugs sized.

A series of warrants were executed in Liverpool and also at rural premises on Deeside Lane in Sealand, in response to the force’s continued targeting of drugs trafficking activities in north Wales.

‘Enquiries are continuing at various locations, and I would urge anyone with information relating to drugs dealing in their community to contact us or alternatively speak to CrimeStoppers anonymously on 0800 555 111.’

Under code name Op Venetic – officers from the NCA and other agencies across the UK have been assessing and interpreting intelligence gained when law enforcement partners in France and Holland took down a bespoke encrypted global communication service used exclusively by criminals to carry out their business.

With more than 60,000 users overseas and 10,000 in the UK, EncroChat is a secure mobile phone instant messaging service which is used by criminals to coordinate and plan the distribution of illicit commodities, money laundering and plots to kill rival criminals. keeping a close eye on the criminals involved.

Op Venetic has seen entire organised crime groups taken down as a result of the intelligence and nationally 746 arrests have been made and £54m criminal cash, 77 firearms and more than two tonnes of drugs seized.