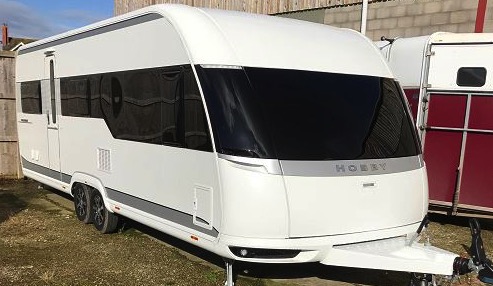 Detectives investigating a burglary and the theft of a caravan in Chester are appealing for information from the public.

Mill Car Sales at The Holkham in Vicars Cross was broken into at around 2am on Monday 8 July.

A white Hobby 645 VIP Premium 2017 caravan was then driven away from the site in a convoy with two white Ford Transit vans.

The vans were seen travelling in the direction of the A41 Vicars Cross Road at around 2.15am.

Police say enquiries into the incident are ongoing.

Detectives have released a photograph of the stolen caravan and are urging anyone with information regarding its whereabouts, or of those who stole it, to come forward.

Detective Constable Victoria Hazlewood said: “The offenders damaged a car at Mill Car Sales whilst stealing the caravan, which had been left secure with two wheel clamps and a towing lock on it.

“We are determined to establish the identities of the offenders, bring them to justice and recover the stolen caravan.

“Enquiries are ongoing and as part of our investigation we are appealing for anyone who believes that they have seen the caravan since it was stolen, or may know where it is, to get in touch.

“The same goes for anyone who believes that they may know the identities of those who stole it or have information regarding the two Ford Transit vans that were used to transport the caravan away from the Mill Car Sales site.”

Anyone with information that may help the investigation, no matter how small, should call Cheshire Constabulary on 101, quoting IML 449898, give the details via https://cheshire.police.uk/contact/general-enquiries or contact Crimestoppers anonymously on 0800 555 111.