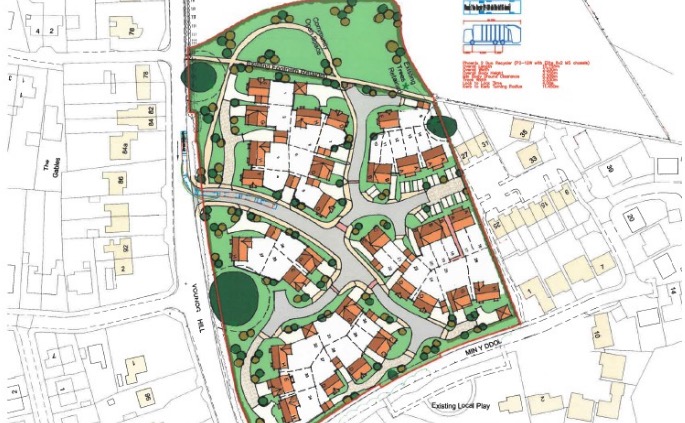 Plans to create almost 40 new homes in a Flintshire village have been resubmitted despite previously being thrown out amid concerns about over development.

Councillors rejected proposals to build on land east of Vounog Hill in Penyffordd at a meeting held last September.

It came after a report by officers said the scheme represented an ‘unjustified’ residential development in an area of open countryside.

Representatives from the Tevir Group, which is behind the application for a total of 37 properties, attempted to have the decision overturned in March.

However, the Planning Inspectorate decided the company’s appeal was invalid as it did not provide sufficient information to meet requirements.

The firm, which used to be known as Roundfield Limited, has now resubmitted the original proposals with extra details about the scale of the houses in a bid to have them approved.

Agents acting on the developer’s behalf said it would help to address a shortfall of housing in the county.

In a planning statement put forward to the local authority, they said: “The development proposed has not changed since the original application.

“The local housing market assessment for Flintshire identifies an annual shortfall of 165 dwellings.

“The application will both help increase the supply of housing land and affordable housing stock within Flintshire, through a proposal that is both sustainable and deliverable.”

A total of eleven affordable homes would be provided if the scheme moves ahead.

When the plans were last discussed, community leaders voiced their opposition because of the level of development already approved.

A number of successful planning appeals have resulted in 261 new homes being green lighted in the village, including 186 being built by Redrow on land off Chester Road.

Speaking at September’s meeting, Penyffordd councillor Cindy Hinds said the houses being put forward at Vounog Hill did not meet the needs of people living in the area.

She said: “Our village has had enough building to last a lifetime.

“We as a county council should be making sure this happens. We are in our own buildings, but not in private developments.

“There is not one bungalow on the Vounog site or any other site which has been passed by the authority or Welsh Government.”

Comments are currently being invited on the renewed plans via the Flintshire Council website.

The authority is aiming to decide on the application by the end of September.