Piers Morgan has called a Flintshire MP “a pompous twerp” in a row over the UK government’s response to the coronavirus crisis.

The Good Morning Britain host has been fiercely critical of political leaders over the weekend, accusing them of not enforcing social distancing measures strictly enough.

His comments were made as pictures and videos of tourists flocking to parts of North Wales were shared on social media, despite non-essential travel being discouraged.

Posting on Twitter, the Tory politician said: “Piers, you have been a massive distraction from the very start. Your constant badgering and “challenging” as you call it causes confusion and hampers the efforts of the government to keep people safe. 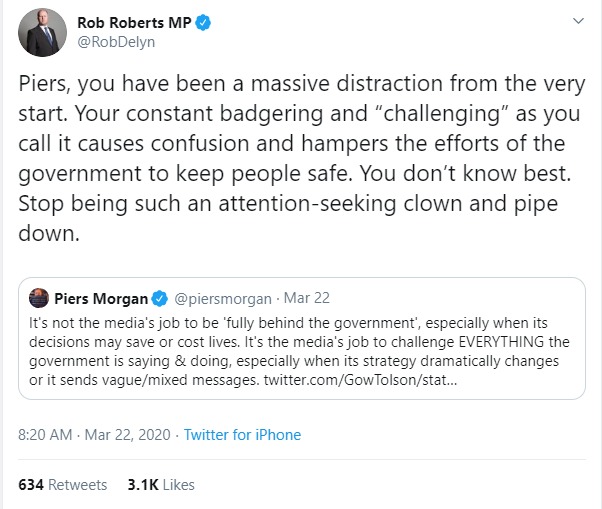 “You don’t know best. Stop being such an attention-seeking clown and pipe down.”

The former newspaper editor replied: “Your colleagues in the government have woefully mishandled this crisis & I will continue to ‘badger’ & challenge every decision, or failure to make a decision.

“I strongly suggest you stop being a pompous twerp & do the same, or what’s the point of you being an MP?”

In response to the former newspaper editor’s insult, he said: “You have literally zero clue what is going on behind the scenes and who is questioning what.

“Unless you want to upload some kind of documentation showing you’re more qualified than the CMO (Chief Medical Officer) and CSO (Chief Scientific Officer) of the UK, your words mean nothing. You’re spreading irresponsible confusion.” 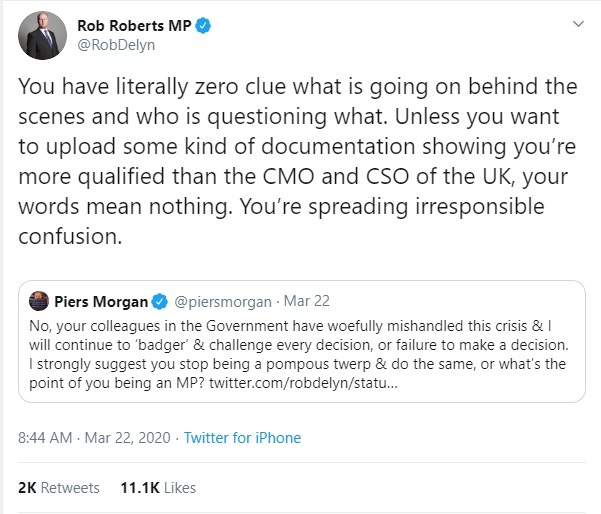 Mr Roberts, who pulled off a shock victory in last year’s general election, was recently criticised for claiming the UK’s strategy for tackling COVID-19 was working.

In a tweet, he compared the nation’s number of confirmed cases and deaths with those in Italy, but later deleted it after being accused of misleading people due to testing being scaled back.

The report has since been rejected by Downing Street as “a highly defamatory fabrication”. 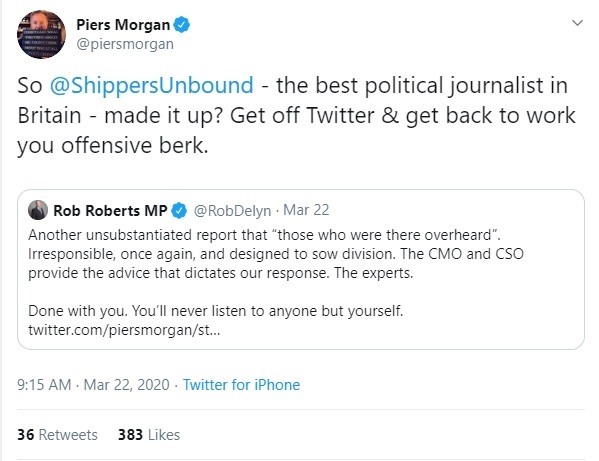 However, the ITV presenter, who has more than seven million followers, described the government’s approach as “clueless and callous”.

In his final retort, Mr Roberts said: “Another unsubstantiated report that “those who were there overheard”.

Irresponsible, once again, and designed to sow division.

“The CMO and CSO provide the advice that dictates our response. The experts.

“Done with you. You’ll never listen to anyone but yourself.”

Mr Morgan replied by telling him to “get off Twitter and get back to work”. 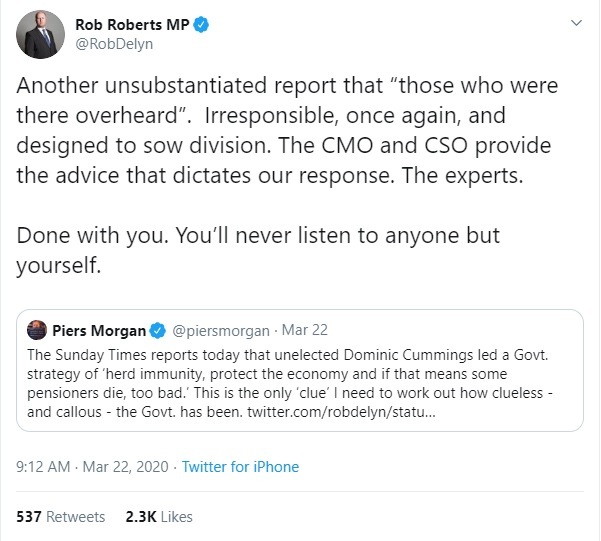