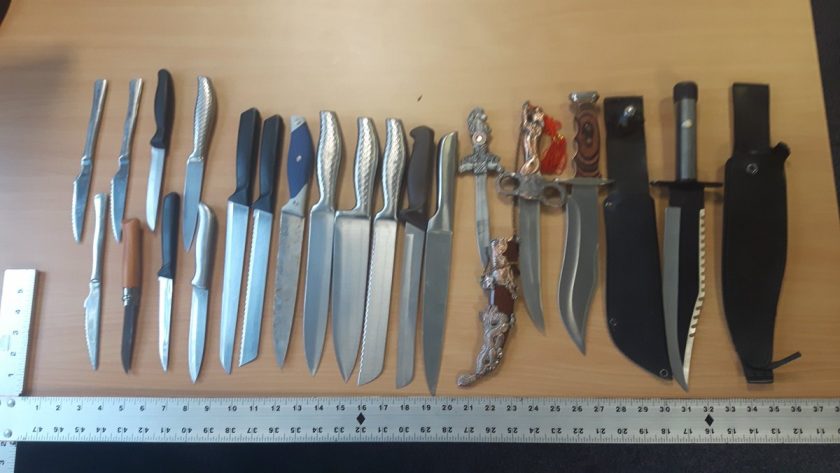 North Wales Police is cracking down on knife crime as part of a national week of action which highlights the risks that carrying a bladed weapon can bring, as well as targeting offenders who use and carry knives in the area.

Taking place between 16th and 22nd September, Operation Sceptre will see the force taking part in a knife surrender, where special amnesty bins will be located across the giving people the opportunity to dispose of knives and blades safely. Similar bins will be placed at a number of recycling centres for people who do not feel comfortable attending a police station.

As part of the Home Office supported campaign, licenced premises are being issued with knife-detection wands which have been funded by the Police and Crime Commissioner, Arfon Jones.

Temporary Detective Inspector Tecwyn Green, Operation Sceptre Co-ordinator for North Wales Police said: “Carrying knives is totally and utterly unacceptable and we hope that introducing these wands will not only act as a deterrent, but they’ll also reassure people who are planning an enjoyable night out.

“Knives are dangerous and there is no place for them on the streets of North Wales. Carrying knives or other weapons do not keep you safe. By carrying a knife you are putting yourself in much greater danger, and more likely to become involved in a violent situation and get injured yourself.

“All licenced premises that are being given these wands have been extremely positive and are pleased to play their part in the national campaign. These venues rarely have issues relating to knife crime, yet they fully understand the importance of having a preventative initiative such as this one in place.

He added: “We want to ensure residents are safe from knife crime in their communities so we are pleased to be promoting our week-long knife amnesty where people can hand in knives without fear of punishment. Since July 2017, a total of 1,691 knives have been handed in across North Wales.”

North Wales Police and Crime Commissioner Arfon Jones said: “The rise in the statistics for violent crime is a general trend across the UK and it is important to remember than North Wales is still one of the safest places to live and work.

“Another important factor to remember is that there have been changes in the recording methods of some categories of crime, including violent crime, and this has also had an impact in skewing the statistics.

“Nevertheless, it is vitally important that we tackle this scourge and I know it is a priority for North Wales Police.

“The message is clear. Knives and dangerous. They can maim and even kill people.

“I would urge young people to support this campaign and report any concerns they have about knife crime.”

During the week School Community Police Officers will be attending primary and secondary schools throughout North Wales to give a presentation on knife crime as part of the All Wales Schools Programme.

Unwanted knives can be disposed of in special amnesty bins which will be placed in police stations in Wrexham, Mold, Rhyl, Llandudno, Colwyn Bay, Bangor, Caernarfon and Holyhead. They can also be taken to recycling centres at Mochdre, Abergele, Rhyl, Denbigh and Ruthin. Please ensure any sharp ends are securely wrapped in a protective material.

T/D.I Green added: “We take a robust approach to anyone found to be illegally in possession of a knife or bladed article on the streets and I would encourage you to take this opportunity to rid yourselves of any illegal weapons by taking them to any of the named stations.

“We are grateful for the support of the licenced premises, the community and our partners with this campaign and together, we will continue to work towards removing knives and dangerous weapons and bring those responsible, for carrying and using them, to justice.”