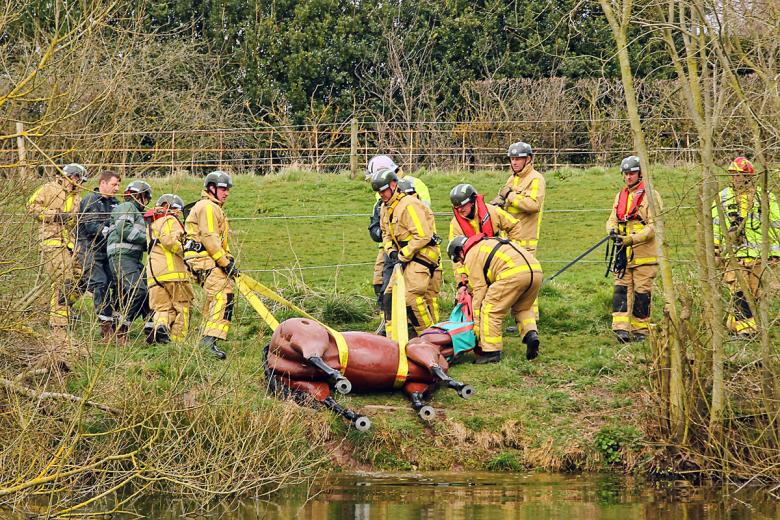 Fire chiefs have been quizzed over who holds responsibility for rescuing livestock in North Wales.

It comes after North Wales Fire and Rescue Service took the decision to axe its large animal rescue service in 2015 because of budget constraints.

At a meeting this week two members of Flintshire Council raised fresh concerns about the move, which it was previously warned could compromise animal welfare in the region.

To highlight the issue, Conservative group leader Cliver Carver questioned what would happen if an elephant fell from a lorry on the A55.

However, his query was greeted with laughter by some councillors at County Hall in Mold, as he was told it would be treated as a traffic incident and the fire service would still attend.

Cllr Carver said: “If the fire brigade doesn’t have responsibility or doesn’t go out to rescue a large animal, if someone contacts me and says ‘Who do I call?’, who do I tell them to call?

“Say a zoo is being transported down the A55 and the elephant falls out of the lorry and lands in a ditch, what do we do? Do we call the hunter?”

In response, chief officer Simon Smith said he did not believe the decison had made a significant impact, although was aware of an active Facebook group lobbying for the return of the service.

It is believed he was referring to the group named ‘Reinstate North Wales Large Animal Rescue Services’, which has almost 700 members on the social media site.
He added that the unit, which was based at Colwyn Bay Fire Station, was not often called upon when it was active.

He said: “What we’re talking about is the type of incident where someone’s cow or horse would be stuck in a ditch.

An example of us doing that right on the cusp of withdrawing the service was a horse’s hoof caught in a cattle grid.

The first port of call was to ring us for help, and to this day I fail to see precisely what it is we can do to help, the first call should be to a vet as far as I can see.

The incident you’re talking about, if there was a horse box being transported down the A55 then clearly that’s a road accident and we would be required to attend.

We would deal with the consequences of that in regards to the animal.”

Cllr Ian Dunbar said he agreed that the service should focus on humans rather than animals.

He added: “I can see that people are very interested in animals, I didn’t expect that, I expected them to ask about saving people.

Can I just ask, were you there when the cow jumped over the moon, did you assist in that one?”