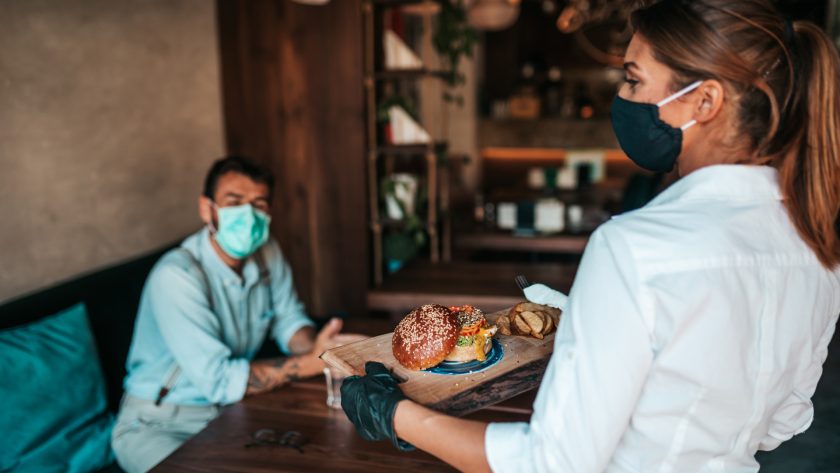 Wales’ health minister has said some hospitality businesses may not bounce back from the latest round of restrictions imposed in a bid to slow the spread of Covid-19.

Pubs, bars and restaurants in Wales will be banned from selling alcohol and forced at 6pm from today.

Welsh Government has also issued new travel guidelines from 6pm today which strongly advise people against travelling to other parts of the UK.

The fresh measures being introduced are aimed at stemming the spread of the COVID-19.

The new restrictions will come into force just a month after the end of the the Wales wide firebreak as cases begin to rise again.

First minister Mark Drakeford said without tighter restrictions, there could be between 1000 and 1700 “preventable deaths”, according to scientific modelling.

The 6pm curfew and ban on serving alcohol on all 3,227 pubs in Wales will “destroy the sector,” Emma McClarkin, Chief Executive of the British Beer & Pub Association said.

Ms McClarkin said: “Evenings are the key trading period for pubs and enjoying a beer, with or without a meal, is one of life’s simple pleasures – forcing pubs to close at 6pm and banning alcohol sales all but closes them down in reality.”

“When you factor in that December, with the festive season, is the most important time of the year for pub goers and our sector, this really couldn’t come at a worse time.”

In England a total of 23.3 million people – 41.5 per cent of the population – are in Tier 3 restrictions where pubs and restaurants are only allowed to open for a takeaway service.

More than two million people are living under Scotland’s toughest Covid lockdown restrictions where restaurants, cafes, pubs and bars are also closed except for takeaway service.

There are reports that many hospitality businesses in Wales are choosing not to open once the new restrictions come into force./

JD Wetherspoon Chairman Tim Martin said it is “just not viable” to open the chain’s pubs in Wales.

During a busy morning of media interviews, health minister Vaughan Gething told the BBC the new restrictions imposed on the hospitality industry in Wales was not a “pleasant choice to have to make.”

He said: “When ministers made this choice we knew that there would be businesses who choose to close, we also know that some of those businesses may not come back.”

“We know there’s real harm caused by the choice that we have made, I understand the frustration of people who own businesses and who work in them.”

Yesterday the Welsh government published the ‘evidence’ behind the decision to impose the tough new restrictions on hospitality with a collection of documents from it’s Technical Advisory Cell, Public Health Wales and official statistics.

The government also points to a UK government Cabinet Office policy paper called the “Transmission risk in the hospitality sector” which includes a number of links to  documents from The Scientific Advisory Group for Emergencies (SAGE).

Mr Gething said: “We have looked at the impact of the firebreak …. and the significant additional evidence we’ve had since then.

We have been “comparing and contrasting the different measures in place across the UK that’s referred to SAGE papers on the 11th and 19th of November, which obviously post dates to firebreak.”

“We’ve had a look at where our (infection) rates are going… yesterday the rates went up in 20 out of 22 local authorities in Wales, you can consider and try to see what’s happening in front of a period of time and then you have to act.”

Mr Gething said they decided to act based on the advice of the Chief Medical Officer “because we can see the pattern (of infections) going up.”

The health minister said: “Wales was an outlier within the UK, and indeed much of the Europe in maintaining hospitality opening with alcohol, and it was his advice ( Chief Medical Officer Dr Frank Atherton) that we needed to act, that’s backed up by the scientific advice.”

Some travel restrictions between Wales and England will also be lifted from 6pm this evening though Welsh government is strongly advising people against going other parts of the UK.

Travel to tier two areas such as Liverpool and Chester will be possible within the new rules.

Travel will not be allowed to tier three ‘very high alert’ areas such as Manchester.

One politician has said partygoers from Wales travelling to Chester will cause more problems in terms of spreading the virus than keeping Welsh pubs open.

Plaid Cymru’s North Wales MS Llyr Gruffydd, who made an impassioned plea for the Labour Government to re-think its draconian no-alcohol policy for pubs throughout the country.

The call comes after the Welsh Government allowed travel between Wales and Tier two areas in England, which include Liverpool and Chester.

Mr Gruffydd said: “Staying safe and saving lives remains the top priority in this Covid-19 pandemic. Even with good news about new vaccines, it will take some months to roll those out to everyone.

“In the meantime we have to maintain a sensible balance in terms of allowing people to work and live. Penalising the hospitality trade – pubs, restaurants and cafés – after a terrible year will send many to the wall. Don’t kill our pubs.”

“The impact of losing jobs and businesses will be terrible. And it makes no sense that people can meet in groups of four from different households for a coffee but two people from the same household can’t go for a pint!”

Mr Gruffydd added that many Welsh people living close to the border will hop on a train or bus to go to Chester or Liverpool to enjoy a Christmas meal or drink.

He said:“Mark Drakeford’s draconian no-alcohol policy has hit wet-sales pubs and food pubs alike and most will be closed now until the New Year. That makes no sense when the same government is permitting people to go across the border to Chester and further afield with the likelihood of greater transmission of the virus as a result.”

“Security and safety in a well-run Welsh pub is going to be lower risk than catching the last bus home from Chester after a night out. It might not be the only thing you catch.”

Plaid Cymru is calling for a compromise that would allow licensed premises to serve alcohol and stay open until 8pm.

The Welsh government will review the restriction on the hospitality industry on December 17.