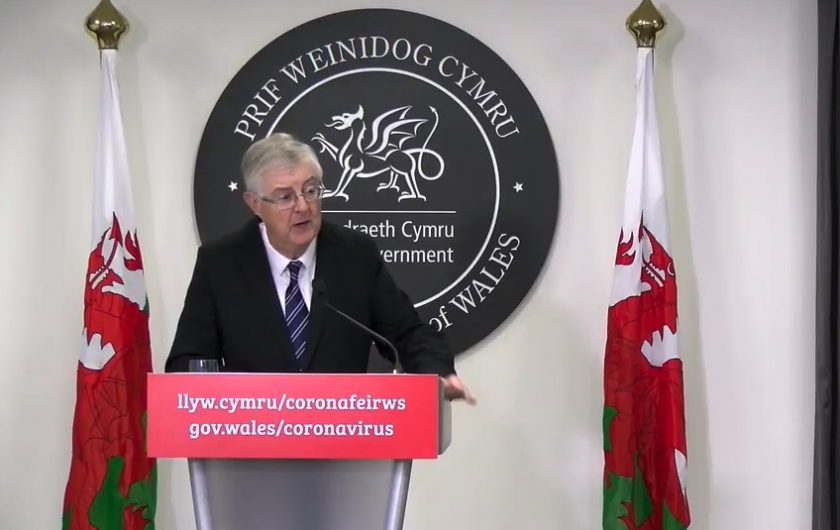 First minister Mark Drakeford has called for on UK government for “regular reliable rhythm of engagement” as tougher coronavirus restrictions are set to come into force in North West England close to the border with Wales.

The UK government has announced that local lockdown measures will come into force in all of Merseyside, Halton and Warrington from Tuesday 22 September.

During today’s Welsh Government daily briefing Mark Drakeford called for “regular reliable rhythm of engagement” and a joined up approach between the four nations as we move into the next stage of the pandemic.

It comes after what the first minister says has been a lack of meetings and correspondence with the Prime Minister – with the last phone call taking place between the pair back in May.

Mr Drakeford raised concerns about the impact the measures being imposed in places such as the north west could have on north Wales and other areas bordering England.

He  said: “Many people will have turned on their radios this morning to have heard the news that there are new restrictions being imposed in the northwest of England right along our border in North Wales.

“I’ve heard speculation that the Prime Minister is considering a national two week lockdown in England.

“As many people will have known there have been numerous examples of problems over this week with a UK wide lighthouse lab testing system, people experiencing problems booking tests sent many hundreds of miles for a test and delays in getting the results.

“All of these issues need to be discussed at a UK level by the four governments, working together, but as far too often in this crisis that opportunity has not been there.

“Today once again I repeat my calls to the Prime Minister for proper engagement with the devolved governments of the United Kingdom.

“In this most difficult week, there has been no meeting offered to first ministers of any sort.

“Since 28 May, months ago now, there has been just one brief telephone call from the Prime Minister.

Now I think that that is simply unacceptable to anyone who believes that we should be facing the coronavirus “crisis together.

“I say again as I said many months ago, we need a regular reliable rhythm of engagement, even a single meeting once a week would be a start.

“And I make this argument, not because I think we should all do the same things, but because by being around the same table together each one of us is able to make the best decision.”

He added: “I think it is so important for us to have a meeting with ministers and the Prime Minister together.

“If England were unilaterally to go into some form of national lockdown hundreds of people who live in Wales work in England.

“They will be directly affected, it would be wrong for that decision to be made without an opportunity for the Welsh First Minister to have explored those implications with the Prime Minister and for them to be taken into account.

“It’s not possible to make unilateral decisions without be properly informed about the way in which they would have an implication for others.

“That’s why I’m repeating my call this morning, for a regular series of those meetings.”