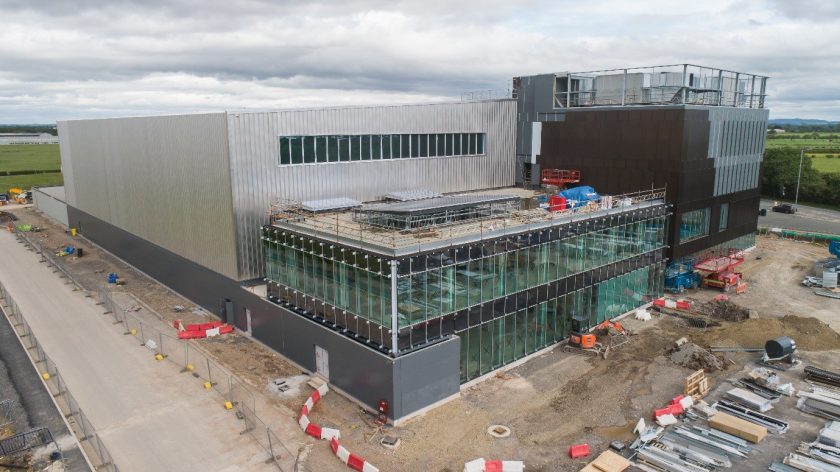 Construction is progressing well on the centre which will provide a new level of support to business and facilitate collaboration between industry, academic partners and entrepreneurs. It will be a catalyst for economic growth by driving innovation, commercialisation and development of cutting edge skills.

The Welsh Government has invested £20m in the centre which will have a strong focus on advanced manufacturing sectors including aerospace, automotive, nuclear and food and Airbus are confirmed as the first major tenant.

It is scheduled to be completed in the Autumn and it is predicted that the benefit to the Welsh economy could be as much as a £4bn GVA increase.

Ken Skates also announced that current Principal of Coleg Cambria and Chair of the Deeside Enterprise Zone, David Jones OBE will chair the Local Advisory Board which will oversee activity related to AMRC Cymru, including advising on projects. Mr Jones will chair the board for an initial period of six months, allowing time for a permanent chair to be appointed.

The Minister said: “As construction work on the centre in Broughton is progressing well and is on schedule, I’m pleased to be able to announce that it will now be known officially as AMRC Cymru.

“I’m also very grateful to David Jones who has agreed to chair the Local Advisory Board and provide leadership for the initial six months. This is an important role in the governance of the centre, providing advice on projects and ensuring they deliver against the priorities of our Economic Action Plan.

“I have said previously that AMRC Cymru is a game-changer. It will ensure a thriving industry base that will be a catalyst for economic growth across the supply chain, increasing productivity and supporting competitiveness of Welsh industry at home and around the world.

“As we prepare to leave the EU, developments such as AMRC Cymru are more important than ever.

“I’m pleased to see the good progress which has been made to date, and I look forward to the completion of the centre later this year.”

Professor Keith Ridgway, Executive Dean of the University of Sheffield AMRC, said: “It’s great to see the new AMRC Cymru R&D facility in Broughton take shape. We share the Welsh Government’s bold ambition to enhance North Wales’ reputation for manufacturing excellence, creating secure, high-value jobs and wealth for the whole of Wales by acting as a magnet for inward investment.

“Our mission is to drive world class manufacturing innovation for Wales. The focus will be to extend open access to our research expertise and capabilities in automation, digitalisation, design for manufacture and product and process verification to assist Welsh industry to develop new capabilities.

“Airbus is a longstanding partner of the AMRC in a key sector of the Welsh economy. By building on the research relationships we have with them we will ensure the company remains at the forefront of aerospace development, supporting skills in the area and upskilling its manufacturing supply chain partners.

“We will also be working closely with other universities in Wales to maximise our impact, drawing on their research expertise to develop new projects showing how partnerships with industry and government can accelerate big improvements in economic and social wellbeing.”

David Jones said: “The Deeside Enterprise Zone (DEZ) was formed in 2011, and I have been very pleased to Chair the Board with senior industrialists from the region and beyond. Realising AMRC Cymru, as part of the DEZ’s suite of recommendations to the Welsh Government, is a pivotal moment for Wales.

I am looking forward immensely to leading the Local Advisory Board’s initial phase, working with other Board members and stakeholders, to meet the needs of the advanced manufacturing sector”.