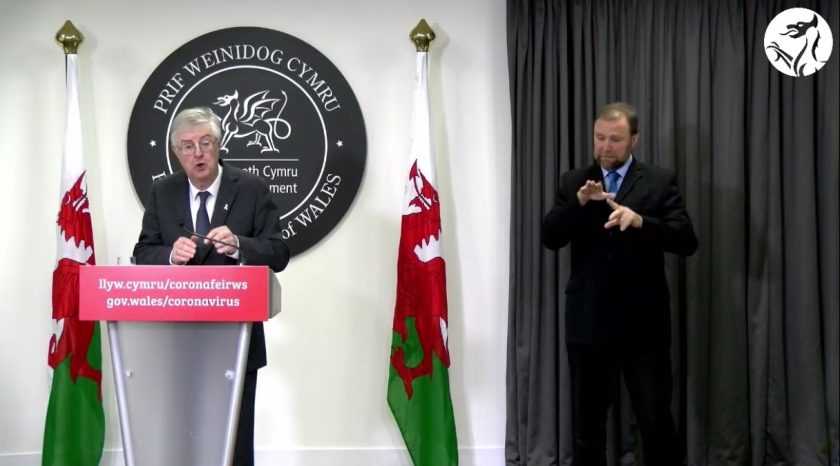 New restrictions will come into force in Wales in a bid to make headroom needed to ‘enable’ the Christmas relaxation of measures.

Earlier this week a broad set of UK-wide measures were announced aimed at helping people come together during the festive period.

Up to three exclusive households will be able to meet up during a five-day Christmas period of 23 to 27 December in the UK.

Speaking today First Minister Mark Drakeford said a “further national effort” is needed to create enough the “headroom” needed for the relaxations over the festive period.

It comes after cases of coronavirus started to rise again after the end of Wales-wide firebreak.

First slide shown – FM says figures starting to rise again after firebreak, “It shows us once again how quickly the situation can change”. Points to death figures, “Every one of those figures represents a family and people grieving today” pic.twitter.com/jAinXyIo7J

Second slide today as FM refers to impact on NHS, says ‘sustained pressure’ in service. Says yellow suspected line has been ‘suppressed’ by testing. Says there is ‘no falling back that would relieve pressure’ on the system. pic.twitter.com/dzOIqdeEeE

Cinemas, bowling alleys and other indoor entertainment venues will be expected to close – and new restrictions will also be imposed on the hospitality industry.

The new restrictions, which have not yet been finalised, will come into force from Friday, 4 December.

Non-essential retail, hairdressers, gyms and leisure centres will continue to operate as they are now.

The First Minister said he will announce the details on Monday including what appears to be a large package of financial support for the sector.

Yesterday 16 out of the 22 local authorities in Wales saw a rise in the seven day rolling average of cases.

He said: “Behind those figures we are particularly concerned about the increases we are seeing in people under 25 years.

“Every local authority other than one today you saw a rise in the incidence rate amongst the under 25 year olds.

“Over the course of this pandemic we have seen how the virus has spread initially amongst younger age groups and then moving on to older and to more vulnerable people.”

Earlier this month when the First Minister announced that hospitality could reopen, he explained that a decision to allow groups of up to four people from different households to meet had been made after listening “to those young people and single people who told us how important it is for them to meet some friends and other family members.”

Commenting on Wales would not be entering into a tier system similar to Scotland and England, Mr Drakeford said he was: “Convinced by the advice that we had seen, that a single set of national measures across Wales, is the most effective way of us being able to communicate what we are asking of people in Wales, making it easier for people to know the rules and to follow them.”

Mr Drakeford continued: “We need to use the coming weeks to reduce the spread of the virus and to create more headroom for the Christmas period.”

“That doesn’t mean a return to firebreak arrangements but the cabinet has agreed to take further specific and targeted action to reinforce the current national measures we have in place.”

“We will focus on those places where we meet and where coronavirus thrives drawing on the recent evidence from SAGE about those interventions that have the greatest impact on the virus.”

“Any additional actions we take will build on that SAGE advice but will be designed to meet the unique circumstances we face here in our country.”

“There will be new restrictions in the hospitality industry which will come into effect on Friday of next week.”

“I know just how hard the sector has worked to put measures in place to protect the public and I know that this will be a worrying time for all those working in the industry.”

“Over this weekend we will be working with partners to finalise the details of the new arrangements and to put in place a further major package of financial support to respond to the challenges and changes faced in that industry.”

Today we asked the First Minister about his understanding of the evidence that hospitality, with many venues having increased PPE and protective processes, is more of a risky setting than say retail – and specifically supermarkets, which going off recent Public Health England data was the primary setting where those who had tested positive with the disease had reported to have been.

The First Minister said, “I think the differences between hospitality and the retail sector include these; First of all, it’s the length of time that people spend in them. So if you’re like me, I generally go into a shop and you try and get around it and out again as fast as you are able to.”

“Whereas if you’re going out for a meal or something then you are inevitably to be spending longer there.”

“You spend that time with a limited number of people, you will pass people in shops, and people must wear masks in shops here in Wales, but you’re not sitting down for an hour and a half with a small group of other people in a retail setting, where we know that that is true in hospitality.”

“You’re not likely to be drinking alcohol as you walk around the supermarket, but you’re very likely to be doing that if you’re out for an evening in a hospitality venue. Most people have a drink and it’s absolutely fine, for some people having a drink means they behave in ways as a result put themselves and others at greater risk.”

“There is good evidence, SAGE publishes it, that shows that hospitality venues even when they’re very well run they can be a source of coronavirus spreading, both inside the venue and sometimes even more so in the way in which people behave as they get to the venue and as they leave it afterwards.”

“Now, I think all of those means it’s possible to distinguish between the way that people behave in retail settings and the way that they do in hospitality.”

You can view the full briefing, along with the Q&A on the below video: