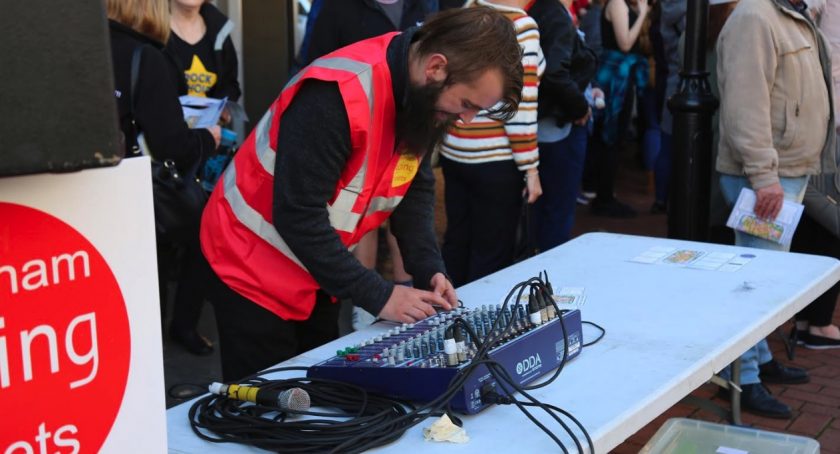 A music technology student who helped ensure a choir festival with hundreds of performers ran smoothly is to repeat his performance later this month.

Andrew Stokes, from Acrefair, begins his third year of a BSc (Hons) Music Technology degree at Wrexham Glyndwr University the same week that the Singing Streets choir festival returns to Wrexham for the fourth time – and Andrew will once again be part of the team of volunteers who help ensure the popular event runs smoothly.

He said: “John Jones, who was running the sound on the day, dropped me an email – I’m always up for getting work experience, and the Choir Festival sounded interesting, so I was keen to get on board.
“I arrived in the morning and we had a quick briefing about what was needed – we were based near the miners statue on Lord Street and were setting up and testing the sound system, checking everything worked, then meeting and greeting the choirs as they arrived.

“We’d work with each choir, going through the backing tracks or musical accompaniment they provided, keeping their directors and conductors happy and generally helping out with the set up.

“It was a really good event to get involved in – you’re working with lots of people with choirs coming from all over. I really enjoyed the day – it was great to see people who might have just been out to do their shopping or passing by finding themselves getting drawn in, joining in and singing!”

Throughout the festival, Andrew was able to put to use skills he had learnt on his university course – skills which have since come in useful at a variety of festivals across the UK.

He said: “The facilities at the university are amazing – the tech you get to play with is really good. It’s all top end and it works brilliantly. We had a live sound module in our first year, where you’re shown how to use a mixing desk, set up a sound system and more – and they’re the skills I drew on during the choir festival.

“You have to be aware of a lot of things which people may not consider as part of the set up – like health and safety, where you have to make sure your cable runs are tidy and your speakers are properly secured – your first responsibility is to make sure the site is safe.

“I’ve carried on getting work experience since – earlier this summer, I worked on the Llangollen International Eisteddfod. I spent nine days as a stagehand there on the main stage, helping with the changeovers, working with the acts coming up next to find out their requirements and sharing them with the rest of the stage team.

“I also spent two days rigging the speaker system for the venue – that was absolutely fascinating to see, as there are speakers placed discreetly all round the venue – even in the flowers.

“I’ve had lots of other interesting work experience over the summer – BBC Radio Wales have been recording some live sessions for the Janice Long show in Glyndwr’s studio and I have been helping with those. It’s mostly getting bands set up and ready to play, although I ended up doing back vocals and hand clapping on one of the tracks when the needed someone to do that!

“ I was doing a similar role setting up when Glyndwr had bands playing live in the studios during Focus Wales, and I’ve also helped with some recordings at Roc 2 studios in Borras where they were recording a  BBC radio drama. It’s been a busy summer.”

As well as helping other performers behind the mixing desk, Andrew also performs in a number of bands himself – and is a bass player for Baby Brave and Alpha Chino. As a performer, he played at the Green Man festival earlier this year – and is currently preparing for a trip across the Atlantic.

Her added: “Baby Brave are actually going out to play in Yukon in Canada – that all came about from working with Focus Wales and through some of the contacts they have. It’s a week or so after Singing Streets and it’s going to be great – I can’t wait!”

Lecturer Steff Owens added: “The Singing Streets festival is a great opportunity for students like Andrew. He’s not only learned how to apply the skills they learn here at Glyndwr to real-life situations, but also had the chance to give something back to the community by supporting an event which boosts Wrexham’s profile and welcomes visitors to our town.”
Find out more about Wrexham Glyndwr University’s BSc (Hons) in Music Technology here: https://www.glyndwr.ac.uk/en/Undergraduatecourses/MusicTechnology/

This year’s Singing Streets Choir festival will be held on Saturday, September 28 between 11am and 4pm.

More than 30 choirs will be performing at six venues across Wrexham during the day – at Wrexham Museum, Lord Street, Ty Pawb, Eagles’ Meadow, Hope Street and Queen’s Square.

There will be a Big Sing – where all the choirs, plus the public, join together for a mass singalong – at 1.30pm in Queen’s Square.