A Mancot mum has braved a 10-mile obstacle course to raise money for a prostate cancer charity after her father was affected by the disease.

For the second year running, Delyth Jones, a customer services representative for McCarthy Distribution, on Wrexham Industrial Estate, took part in the Tough Mudder Classic at Cholmondeley Castle in Cheshire.

This year, she raised £400 for Prostate Cancer UK after her much-loved Dad, Barry Hickman, 70, of Drury, was given the all clear from the disease two years ago.

Barry discovered he had the disease eight years ago following a routine medical check-up.

He underwent surgery to remove the affected area and was then given radiotherapy and a trial drug.

Eventually, blood tests revealed the disease had disappeared for which Delyth and her family feel ‘very fortunate’.

The Tough Mudder challenge is not for the faint hearted and is described on the website as ‘8-10 miles of mud-soaked mayhem absolutely loaded with 25 best-in-class obstacles and 10 new or updated 2019 obstacles on every single course.’ 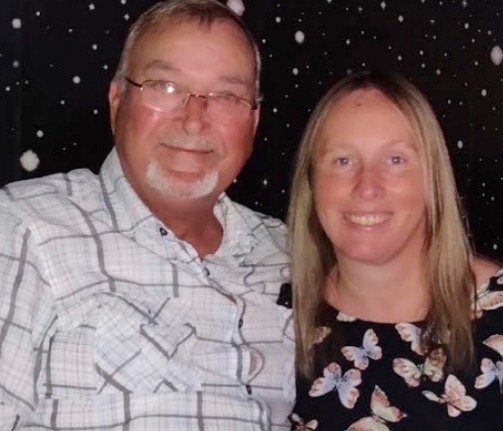 Delyth, 47, who is married to Glen and is mum to Ciaran, 15, and Erin, 11, said of the challenge: “It was definitely tougher than last year for me. They had an extra couple of obstacles and I struggled a bit with the running inbetween.

“Not just people from my own team but all of us came across people who needed a bit of help and they returned the favour. It’s a great laugh because you are all in it together.”

Delyth completed the course with her team, who were all fellow parents from her daughter Erin’s school – Hawarden Village Church School, in three and a half hours. She said the worst obstacle was called The Artic Enema.

She said: “You go down a sewer pipe into a skip full of iced water and half way through that is a barrier and you have to swim down and underneath it before coming back out the other side. That was the one that had me panicking a bit but I am pleased to say I managed it!”

Delyth’s proudest supporters were her mum Beryl and her Dad Barry. She said: “They were very proud of me and my Dad gave a big boost to my fundraising which was lovely.

“I also had some terrific support from my colleagues at McCarthy Distribution who when they heard what I was doing and why I was doing it, they were really generous with sponsoring me which I was really grateful for.”

Mike McCarthy, Managing Director of McCarthy Distribution, said: “Once word got round about the challenge Delyth had set herself for the second time, many people gave very generously and we all feel Delyth deserved our support.

“Some of the obstacles sounded awful and I am not sure how many of us would follow in her footsteps and give it a try!

“We are all thrilled for her that she made it round and so pleased to hear she has smashed her original fundraising target. I am not surprised to hear her family are very proud of her.”

When asked if she might take up the tough mudder challenge for the third time, Delyth said: “I am not sure about that to be honest. I think twice may be enough. But we are definitely planning to do a fresh challenge next year. I am hoping it might involve a beach in the Mediterranean somewhere but I think it is unlikely!”

To sponsor Delyth, you can still go to her Just Giving page https://www.justgiving.com/fundraising/delyth-jones15