Leading female entrepreneur speaks on the Power of Networking 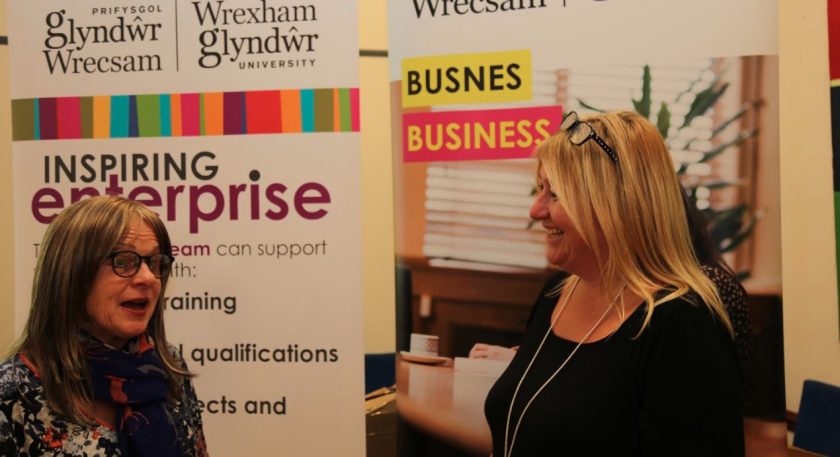 An entrepreneur who has built one of the region’s foremost female-focused organisations has encouraged others to harness the power of networking.

Ruth Lloyd-Williams, the founder of Network She, was at Wrexham Glyndŵr University’s ‘The Power of Networking’ event, where she spoke alongside business lecturer Dr Jan Green on the importance of building networks and the impact they can have on your business.

Network She started when Ruth’s then 21year old daughter launched a business in the wedding industry in 2007. As part of her efforts to help out, Ruth, from Llandudno, decided to put on a female-based networking event – whose success surprised her.

Speaking before the event, she said: “I knew there were other people out there who shared my concerns that women didn’t have suitable access to support or relevant events being put on for them – but when 75 women turned up for that first event, and 50 of them joined on the night, I realised there was work to be done!

“These weren’t just women from Llandudno either – they were from right across North Wales and North West England. I knew then that Network She would be a success – and here we are more than a decade later!”

Since its inception, Network She has held all kinds of events – from seminars and conferences to exhibitions and awards. A key highlight for this year was the Women in Sport North Wales Conference, held at Surf Snowdonia, empowering participation of women and young girls in sport.

Ruth added: “It’s estimated that women-led businesses contribute about £75 billion to the UK economy – so recognising their power, and the power of networking, is something I’m always keen to talk about and something I will be focussing on during my presentation here at Glyndŵr.”

The evening was one of a series of Chartered Management Institute (Cymru) events held on a regular basis at the university.

Dr Green, who is a member of the CMI (Cymru) Board, said: “Holding Chartered Management Institute events on campus provides an opportunity for local employers and business owners to see our facilities and engage in relevant skills development.

“The Power of Networking event attracted business people from a wide range of sectors who were proactive and a quick review of the evaluation sheets indicates that they enjoyed the content and were able to practise and improve the valuable business skill of networking.

“If everyone who was there made as many new contacts as I did the event was an overwhelming success!

“All attendees were asked to make suggestions for future CMI/WGU events and based on the feedback, the next event will be on Wednesday, 20 February 2019 with a change management theme – further details will be circulated early in the New Year.”

Find out more about Network She here: