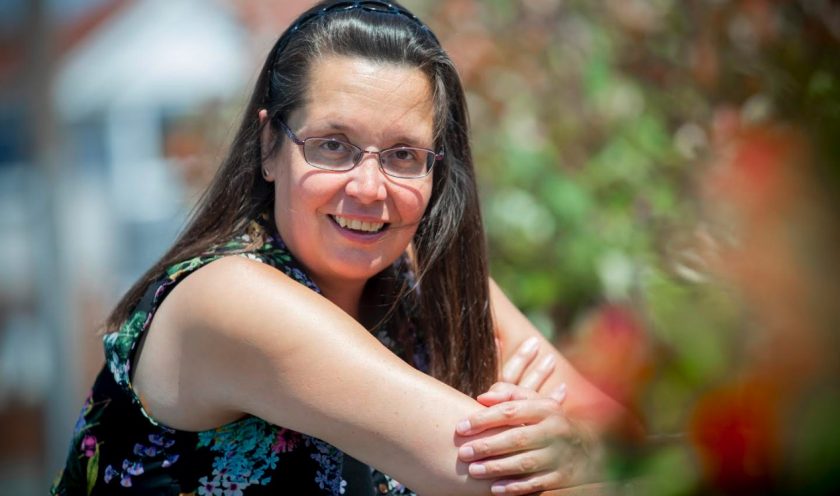 An inspirational woman who regularly opened a bottle of wine for breakfast and washed it down with vodka is getting her life back on track thanks to a pioneering scheme.

Samantha Taylor, 47, who hails from Shotton, is being supported by the appropriately named Dechrau Newydd (Fresh Start) scheme which provides rapid-response support and help to break the vicious circle of drug and alcohol addiction and offending.

The initiative, managed by the Kaleidoscope organisation, has been commissioned jointly by the North Wales Police and Crime Commissioner Arfon Jones and Her Majesty’s Prison and Probation Service (HMPPS).

Sam landed herself in trouble when she was arrested and charged with drink driving after crashing her car one morning while more than twice over the drink drive limit.

As part of her sentence, she was assigned a Kaleidoscope Project Criminal Justice Resilience Worker.

Sam now meets with Amanda Weaver once a fortnight and they speak regularly on the phone discussing any issues Samantha has and to check on her progress.

Her issues with alcohol started when she lost her mum to cancer aged 18 when she was living in Shotton.

She said: “Mum died aged 44 when I was just 18. It really rocked me. My dad went off the rails and hit the bottle, but he’s OK now. It was down to me to run everything and my sister was only 14.

“I managed to go to university, in Preston, and came away with a good degree in languages, French and German, and Business. I worked for a company that carried out repairs to cranes and heavy plant in Germany and France so my language skills were a big help.

“I then worked for a tour operator for 12 years arranging holidays abroad and in the UK but as I was on call 24 hours a day it was too much. I then worked for an agency doing clerical work for a company and packing live fish for the pet trade.”

Sam moved to Rhyl in 2018, 12 months after she met a new partner who turned out to be abusive.

She said: “He moved in with me in Shotton. I should have known better as he was aggressive and had terrible moods if he didn’t get his own way. After we moved to Rhyl he started smashing up my things.

“I ended up sleeping on the sofa in my own home and asking myself the question, why was I doing this to myself?

“He became more aggressive and violent and would assault me. We’d be in a shop or supermarket and he start shouting abuse if I looked at something he didn’t want. In the street he’d abuse me if I walked too slow or too fast.”

According to Sam, her consumption of alcohol spiralled out of control once she was on her own.

She said: “I’d get up in the morning and start. At my worst, I’d polish off a bottle of wine very quickly and then go onto the vodka. I’d easily finish a full box of wine, six bottles, and a large bottle of vodka over two days. I drank to go to sleep and help me forget things.

“Then I became ill and ended up in hospital with an irregular heartbeat.

Sam was found two times over the limit when she was breathalysed after a crash.

At Llandudno Magistrates Court, she was banned from driving for three years, fined and sentenced to 250 hours of community service.

As part of the sentence, she had to agree to work with the Kaleidoscope Project for six months.

She said: “I’ve found my fortnightly meetings with Amanda a massive help.

“We speak on the phone and meet up, socially distanced, every fortnight. She’s helping me so much in moving on.”

She added: “My drinking was out of control and I did get to the point, more than once, when I thought about suicide. I lost all sense of direction with my life.

’Amanda though has made me realise there is more to life than looking through the bottom of a wine bottle or glass.

“I’ve now reduced my alcohol intake to the odd beer with an evening meal but not every day.”

There has been much more engagement and a more relaxed atmosphere. That’s proving very helpful with my work with Sam.

“We need her to face up to her responsibilities and put coping mechanisms in place that build resilience so she can better cope with dramas and crises.

“Sam drank herself into oblivion because she couldn’t face life’s crises but by building her resilience and self-esteem she can look forward to a brighter future.”

Commissioner Arfon Jones said: “Alcohol is a drug like any other and sometimes people get themselves into a downward spiral that leads them only one way and that’s into the criminal justice system.

“It’s easy to put offenders before the courts and leave it at that. But many offenders just need a helping hand and a chance to get back on the straight and narrow.

“Dechrau Newydd is there to try and break that cycle and hopefully give people that all-important second chance in life.

“It’s all about offering a tailored effective holistic support which reduces offending behaviour and substance use, and breaks the destructive cycle of substance use, offending and prison.”

Kaleidoscope chief executive Martin Blakebrough added: “ We work with partner agencies and we all have a role to play. We have moved in one direction of travel and there is no going back to the old system which all too often failed to address the substance misuse issues of persons coming into contact with the criminal justice system or being released from prison.”