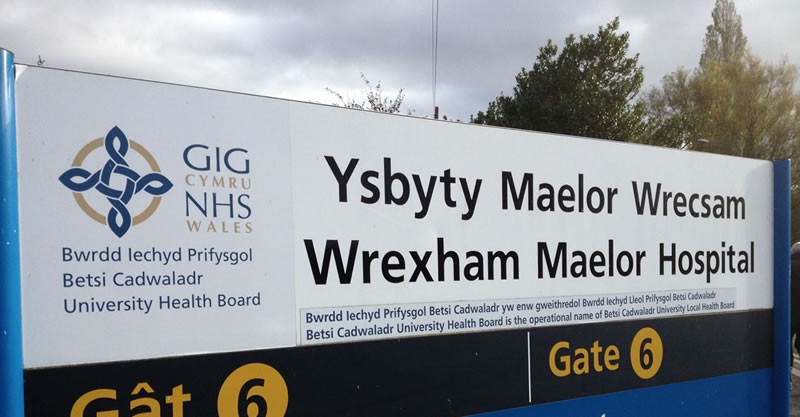 It comes after officials from Healthcare Inspectorate Wales (HIW) found some people queuing on corridors were being put at risk of harm.

Members of the inspection team said they were forced to step in on several occasions to alert staff to care issues during a surprise visit in August.

In one case they had to draw a nurse’s attention to a patient who was experiencing chest pains, while others encountered delays of more than eight hours in receiving treatment.

In their report, inspectors acknowledged the efforts made by emergency department staff to look after those in need.

However, they called for Betsi Cadwaladr University Health Board, which has been in special measures for more than four years, to make rapid improvements.

They said: “It was identified that patients who were waiting on trolleys in the corridor were not receiving appropriate and timely care.

“Members of the inspection team had to intervene on three separate occasions, with the care of patients waiting on trolleys in the main corridor within the emergency department.

“We had to alert the nurse responsible for the patients in the emergency department corridor to a patient who was experiencing increased chest pain.

“During the inspection, we found that there were no pressure relieving mattresses available for any patients who were waiting on trolleys within the emergency department.

“We considered the above practices to be unsafe and increased the risk of harm to patients.

“This meant that we wrote to the health board immediately following the inspection requiring that urgent remedial actions were taken.”

The report was published shortly after a group of councillors in neighbouring Flintshire called for the Welsh Government to take action over delays at the hospital.

The inspectors said A&E was busy throughout the two days of their visit with patients waiting a “considerable time” to be admitted.

Around a fifth of people surveyed reported waiting between four to eight hours, with some delayed by longer.

Despite noting progress in some areas since their last inspection in December 2017, HIW also highlighted critical comments made by one worker about staffing levels.

In response to a questionnaire, the anonymous employee said: “The emergency department is under-staffed and under-resourced from a nursing, medical and pharmacy perspective.

“The current environment in the emergency department borders on unsafe.

“Whilst individually each patient is kept as safe as possible, collectively the crowding leads to high risk environment.”

Following the inspection, health board officials were asked to draw up an action plan detailing how they intend to address staffing shortfalls.

They were also told they needed to to monitor waiting times and create a strategy to improve the flow of patients.

In a statement released after the report was published, a Betsi Cadwaladr representative said a number of the recommendations had already been addressed.

They said the changes had resulted in the creation of a new unit to ease pressure on the emergency department.

The spokesman said: “The patient safety issues highlighted are unacceptable, and we have already made a number of immediate changes to provide reassurance about the quality and safety of care provided in Wrexham Maelor’s emergency department.

“We have recently revised our acute medical unit at the hospital, which provides support for some patients who have visited the emergency department requiring urgent care.

“This is aimed at reducing unnecessary waits and reduce demand on staff working in the emergency department.”

Since the report, the hospital has started making hourly announcements on waiting times within the emergency department.

However, the spokesman added there are still cases where people were visiting A&E with non-urgent conditions.

He added: “Looking at the clinical need of patients who attend our emergency department, there is potential for them to be seen in one of our minor injuries units, or at a local pharmacy.

“The minor injuries units in Holywell and Mold can treat a number of less serious ailments, while other services in the community, including our pharmacies, can provide fast, effective treatment.”