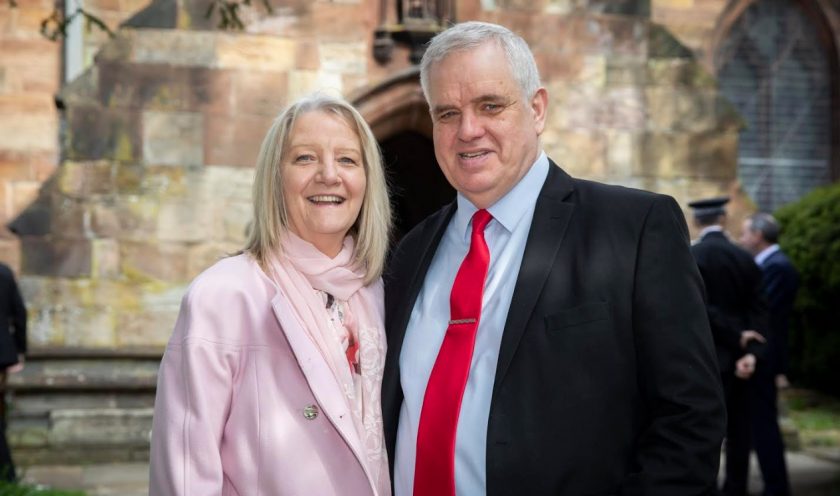 Villagers turned out in their hundreds to say a final farewell to a popular councillor who has died from coronavirus at the age of 63.

Local people in Gwernymynydd, near Mold, lined the streets and applauded as the hearse carrying Kevin Hughes went by with one of his sons, Andy, walking at the head of the cortege.

The coffin was draped with the banner of Kevin’s beloved Aston Villa FC and adorned with flowers spelling Grandad.

On its way to the funeral service at the crematorium in Oakenholt, the cortege drove slowly past Shire Hall in Mold where Flintshire County Council’s flags were at half-mast as a mark of respect.

Kevin leaves his wife, Sally, with whom he celebrated 40 years of marriage three years ago, sons Steve, Chris and Andy, and seven grandchildren.

His death on January 8 came less than three weeks after he delivered a passionate appeal from his Wrexham Maelor hospital bed to people to observe social distancing during the Christmas and New Year period.

Kevin had planned to do a Coast to Coast walk this year in aid of the Hope House children’s hospice charity but his death follows that of his mother, June Margaret Hughes, 89, also from the virus on November 25 at the Countess of Chester Hospital.

He was forced to watch his mum’s funeral via a live stream from his bed in the critical care unit of Wrexham Maelor Hospital.

Son Andy has raised more than £7,800 for the unit by walking 5k a day up until the funeral.

Meanwhile, a collection is being held in lieu of flowers in aid of the Hope House which he supported as a volunteer.

Kevin was born in Kendal in the Lake District in 1957 and moved to Chester when he was four.

He joined Cheshire Police as a diver and later became a member of the CID and the Fraud Squad.

After nearly 20 years as a police officer, he changed career and became head diver at the Blue Planet aquarium in Ellesmere Port where he trained the other divers to hand feed sharks.

Kevin later retrained as a journalist, starting out on a paper in Ellesmere Port where he excelled and was later appointed editor of the Flintshire Chronicle.

In recent years he had worked with the Ceidiog Communication PR agency and was a hugely popular member of the team.

In 2017 he was elected to represent the area on Flintshire County Council where he quickly earned a reputation as a dedicated, effective and shrewd member.

In his eulogy during the funeral service, Andy said: “As you can imagine we have had hundreds if not thousands of messages of support, not only when he passed but also in the weeks leading up to January 8th.

“As a family, we got so much strength from these messages. It was truly humbling.

“He fought so hard to get back to his Sall and our family and you, all his friends. I was so proud, not only of that fight but also of all his life.”

Son Steven also paid tribute and said: “He lived and achieved more in 63 years than most of us do in twice that time. He left a legacy that will live on forever.

“There were so many facets to Dad’s life and so many different ways that people knew him – and so many ways that he touched people’s lives.

“I’ve never known anybody love somebody as much as my Dad loved my mum. That love and devotion made the marriage such a success.

“My Dad had a remarkable career, making a success of every opportunity he was given.”

Kevin was also a talented photographer and son Chris paid a visual tribute with an edited montage of his pictures set to one of his favourite songs, American Honey by country music band Lady Antebellum.

During the service his granddaughter, Imogen, read a poem she had written about her grandfather, his sister, Anne, also recited a poem about her brother and it ended with another of his favourite tunes, Monty Python’s Always Look on the Bright Side of Life.