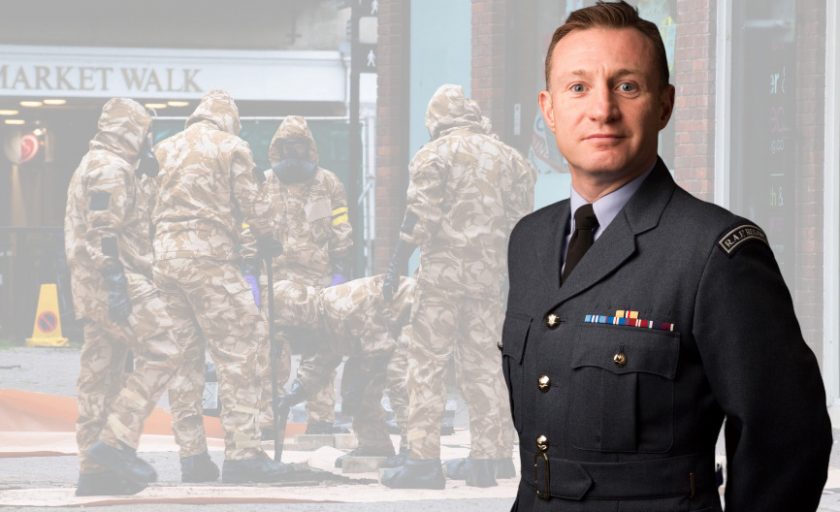 A Royal Air Force officer from Hawarden received an OBE last Thursday from the Prince of Wales in recognition of how he led the military’s response to the Salisbury nerve agent attack.

Group Captain Jason Davies was the commanding officer of the Joint Chemical, Biological, Radiological and Nuclear Task Force during the Salisbury operation.

Gp Capt Davies and his team were tasked with removing the nerve agent Novichok from the city following the attack on a former Russian spy Sergei Skripal and his daughter Yulia.

The pair were found slumped on a bench in Salisbury in March 2018, they had both been poisoned with the nerve agent.

“All members of the Armed Forces are ordinary people trained to do extraordinary things. Everyone signs up with some sense of duty — a willingness to do good, to give back, to help out.

So to have the opportunity to help British people at a worrying time for their city was a real honour — an honour that was matched by being awarded an OBE in the Queen’s Birthday Honours List for my role in the Salisbury recovery.” – Group Captain Jason Davies

Gp Capt Davies recalls how he and his team helped the city recover from the Novichok attack, he said:

“All members of the Armed Forces know what we’re signing up for.

We must be prepared to confront danger, to save people’s lives, to risk our own. To face threats that civilians should never have to face.

But usually this all happens on a battlefield. Responding to a chemical weapons attack in the city of Salisbury, where thousands of civilians live, work and play, brought unprecedented challenges.” 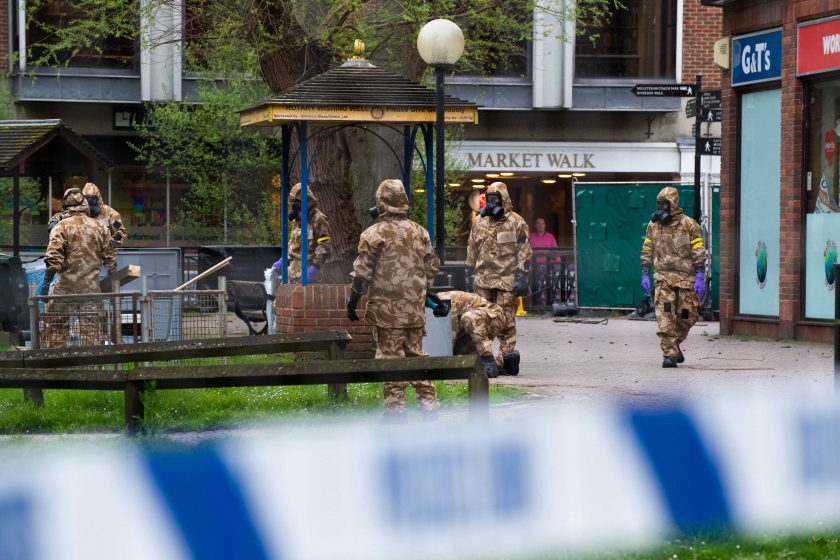 As the commanding officer of the military decontamination task force enlisted to help Salisbury recover, Gp Capt Davies, 48, said he was well aware of the duty he had to protect the country “we signed up to serve.”

“It was our job to remove the deadly nerve agent, destroy any contaminated objects, make the city safe and let businesses reopen and life get back to normal.” Gp Capt Davies said.

When news of the incident broke in March last year, the Armed Forces were called upon by the government to assist experts at Defra with support from civilian specialists to restore safety to Salisbury.

“Our strength was in the huge field of experts we had to choose from, bringing together personnel from the British Army’s Royal Tank Regiment, Royal Corps of Signals, Royal Logistic Corps and Royal Engineers, and specialists in the Royal Air Force Regiment.

In the meantime, a storm grew around us as the media arrived in Salisbury and our allies around the world lent us their support. This added to the pressure we all felt on the ground.

The risks we accept on a battlefield can never be allowed on UK soil, so it was a constant challenge to consider how we can best protect innocent civilians trying to go about their daily lives in the city they call home. That was always at the forefront of our minds.”

Gp Capt Davies from Hawarden received an OBE last Thursday from the Prince of Wales at a royal investiture in recognition of how he led the military’s response to the Salisbury nerve agent attack.
It was Gp Capt Davies’ job to anticipate the dangers and give his team time to recover, “balancing risks and opportunities, limits and strengths.”

“Everything can be a threat — even the weather.

In the heady summer of 2018, working for long hours in heavy protective suits carried the risk of exhaustion and fatigue

You’re always aware of the risks from the day you join up, but you can’t help thinking of your family when you’re heading towards a threat.

You’re very aware of the impact your actions could have on your team, the civilians nearby and your family.” Said Gp Capt Davies.

His team works together all year round to prepare for operations like Salisbury but an operation of that size meant bringing in new members of the team, “so we had to work quickly to bring people up to speed and get used to working with each other.”

“In this case, the pressure was even more intense due to the global impact of the incident, the media scrutiny and the swift response from our allies.

You can’t avoid the pressure, but you put the mission first and remember that your role is to keep Salisbury safe and help the city get back open for business.

The teamwork which helped Salisbury recover shows how the Armed Forces are an integral part of British society, working hand-in-hand with the police, ambulance and fire services to keep people safe.” Gp Capt Davies added.

Police and the Crown Prosecution Service deemed the evidence gathered during the investigation sufficient to charge two Russians, Alexander Petrov and Ruslan Boshirov, with offences including conspiracy to murder over the attack.

The UK Government believed the pair to be agents from the GRU military intelligence service – a claim which Russian leader Vladimir Putin denied.