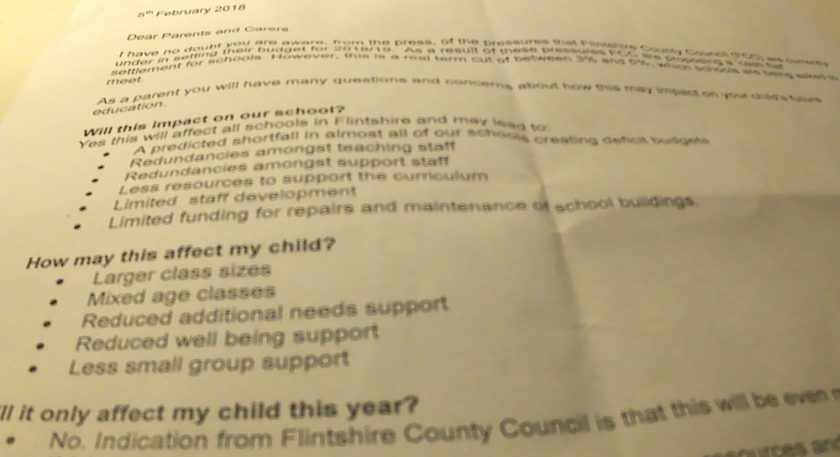 Headteachers in Flintshire have sent letters out to parents this week warning that a proposed ‘cash flat’ budget will spark a funding crisis in the counties schools.

They warn that a predicted shortfall in ‘almost all’ schools in the county will create a deficit budget and result in schools not being able to maintain current standards and impact on children’s education.

School budgets have in the past been ring-fenced from cuts by Flintshire County Council and although the proposed settlement for schools for the next year is ‘cash flat’ in real terms it amounts to a cut of between 3% and 5% when inflation is taken into account.

Yes not very nice letters to receive at all. I will continue to push for fairer funding for Wales and vote against cutbacks to Welsh Assembly. Hoping to arrange a meeting with FCC

The Headteachers letter says; “As a parent, you will have many questions and concerns about how this may impact on your child’s future.”

It goes on to bullet point a series cuts schools could be forced to make in order to meet their budgets they include; Reduduncies amongst teaching staff and support workers.

The letter also warns parents there will be fewer resources to support the curriculum, limited development for staff and very little for repairs and maintenance.

“Pupils can expect larger class sizes and of mixed ages, also additional needs and wellbeing support could be cut.” The letter says.

Worst circumstance we have ever been in

“We really do feel this is the worst circumstance we have ever been in. I have worked in schools 31 years and we have never known a situation like this.”

There’s always been difficulties with funding, but there is actually nowhere else for money to come from, so we’re really concerned that we can’t provide the education that the children have a right to.”

Head teachers say they have shared their concerns with leaders of Flintshire County Council and have lobbied councillors over school funding.

“The Council is currently facing significant challenges to set a balanced budget for 2018/19. The reasons have been set out clearly in a series of statements over the past three years – with the combined impact of continued reductions in Government funding and Flintshire’s low funding base.

As we move into the closing stage of the budget process the Council still has to find in the region of £5.9m (from an initial budget gap of £13.6m) to its revenue budget for the next financial year.

The issue of a potential ‘cash flat’ settlement for schools has been fully debated and is on public record and Headteachers have been kept fully appraised of the challenges the Council is facing.”

Claire Homard added: “Flintshire County Council will meet on 20 February to set its budget for 2018/19 where the final decision about the schools’ budget settlement will be taken as part of the wider budget setting process.”

The Headteachers letter to parents says: “Flintshire County Council would like schools and parents to Welsh Government Assember members and `Westminster MPs to highlight the low funding allocated to Flintshire over many years.”

An extra £75m, has been allocated to the 21st Century Schools and Education Programme a major, long-term and strategic capital investment programme to modernise education infrastructure.

In addition, £30m will be released from the programme in future years for immediate investment in capital projects that will contribute to the goal of reaching a million Welsh speakers by 2050. This is a shared priority with Plaid Cymru.

The money will bring the total invested over the life of the programme to almost £3.8bn. The first phase of the programme will finish in 2019 having invested £1.4bn to support the rebuild and refurbishment of more than 150 schools and colleges across Wales. The second phase will see a spend of £2.3bn.