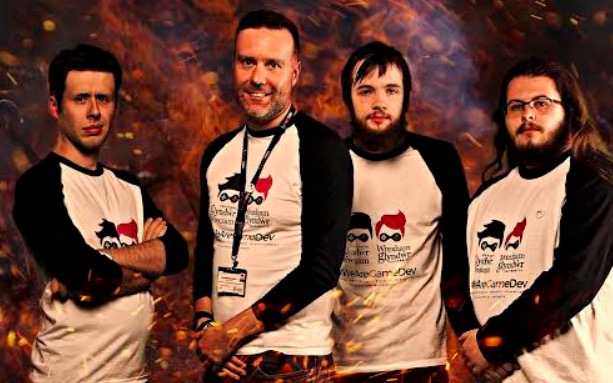 Pioneers in computer games development from Wrexham Glyndŵr University are celebrating after being shortlisted for four national industry awards.

The shortlist for the UK Games Fund Awards – which will be held in Dundee on November 14 – includes key players from the University in four of its twelve categories, including the Community Contributor category where Senior Lecturer in Computing, Richard Hebblewhite, is nominated for outstanding contribution to local and regional games industry development.

The University has also been nominated for Tranzfuser Local Hub of the Year for the game development programme team’s innovative approach to the support and development of student owned games companies as part of the UK Games Fund’s Tranzfuser programme. Based in the University’s Enterprise Lounge development hub, both current students and graduates are supported through the process of building their own game development studios with expert guidance and mentoring.

In addition, a further two award nominations have gone to studios helmed by Glyndŵr graduates: the Transfuzer award, for previous Tranzfuser teams who have gone onto successfully release their own games with Static Shell Studios among the candidates, and the Early Audience Experts award nomination for Samurai Duck Studios for their proactive approach to customer engagement.

Richard said: “I’m delighted to have been shortlisted for an award – it really is a wonderful recognition of the work we do to help develop our gaming degrees here at Glyndŵr.

“However, the real strength of our approach is that we work as a team – whether that is staff, students, alumni or industry partners. These award nominations bear that out, with two of our alumni studios shortlisted and our dedicated team up for community hub of the year.

“I have just come back from EGX, the UK’s biggest game event – we were there to support our 2018 Tranzfuser team, Samurai Duck, but we also took several other student teams with us and it was clear talking to attendees that our course and its alumni are starting to make waves.

“Ongoing support and mentoring to help games developers build their businesses throughout their time with us and beyond is a cornerstone of our Computer Game Design and Enterprise course.

“I’m delighted that that approach has been recognised with the shortlisting for these awards – and we’ll all be looking forward to November to see who wins!”

The team will be represented at Wrexham Glyndŵr University’s next Open Day on October 13 – to find out more, or to book your place, visit: wgu.ac.uk/908p.