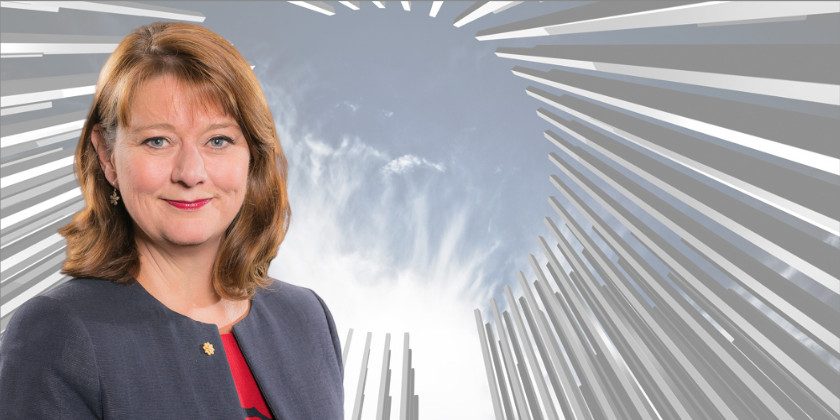 The former leader of Plaid Cymru has backed calls for proposals to create a nine-metre-high sculpture near Flint Castle to be scrapped.

A petition was launched last week against plans for a circular tower artwork designed by Bristol-based sculptor Rich White, who was announced as the winner of a £62,500 contract.

Mr White said the sculpture, being overseen by Flintshire Council, Cadw and art consultancy firm Addo, would celebrate the lives of those who built the castle.

However, critics have claimed it symbolises the oppression of Welsh people, describing it as ‘an insult to Wales and its history’.

The petition, which has so far attracted 900 signatures, has now received the backing of Leanne Wood, who served as Plaid leader for more than six years until September 2018.

It comes after a previous attempt to create an iron ring sculpture at the same site was halted two years ago amid a similar backlash.

The Rhondda AM also took aim at Flintshire Council leader Ian Roberts, who has defended the scheme and slammed its detractors.

She said: “I fail to see the merit or self-esteem in celebrating the oppression of Welsh people and slavery of local labourers who built the castle.

“It seems lessons have not been learnt from the earlier, botched design which rightly caused public outrage.

“Cadw and Flintshire Council should go back to the drawing board and come up with something that celebrates our nationhood, not our subjugation.

“If the leader of Flintshire Council cannot see what I and many others see wrong with this design and the previous one – and why it is a national issue and not just a Flintshire one – then I can lend him some history books so he can comment from a more enlightened position.”

Flint was one of the first castles to be built in Wales by Edward I and construction began in 1277.

The original design was abandoned following a petition, which included claims that it celebrated the conquest of Wales.

The council originally announced the five artists shortlisted for the new scheme in March.

Their plans were put on display at Flint Library during April for residents to provide feedback.

Mr Roberts said the application by Mr White, which is made up of 300 vertical columns, was well received by people from the town.

He also warned the money provided by the Welsh Government to fund the sculpture would be lost if the proposals did not go ahead.

The Labour group leader said: “I think it’s particularly disappointing that once again investment in north east Wales by Cadw should be questioned, particularly when major schemes to enhance other castles receive no comment.

“The people of Flint were thoroughly consulted on these proposals through an exhibition where they could view the draft proposals, comment and vote on them. They voted for this sculpture.

“It is very disappointing that, for their own purposes, former national politicians are getting involved in a £62,000 sculpture.