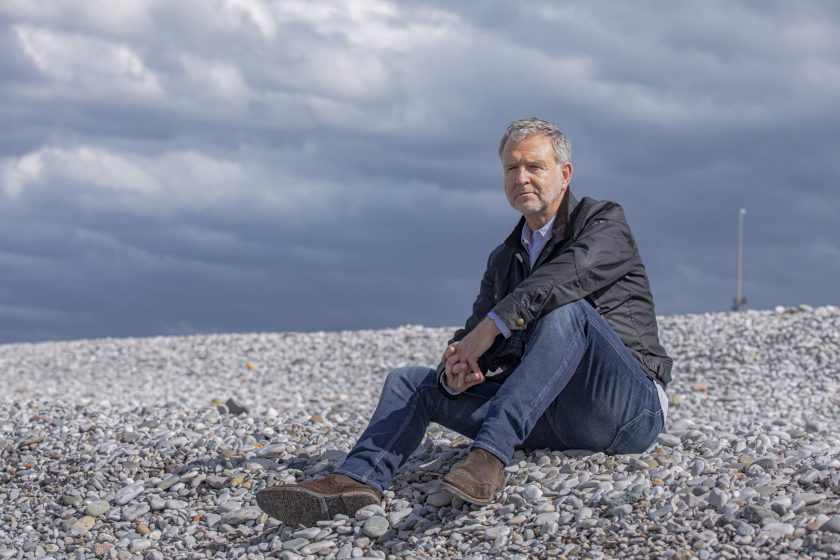 Serial killer Peter Moore who brutally stabbed four men to death is threatening legal action in an attempt to block the publication of a book that reveals the full extent of his depravity.

Bagillt cinema owner Moore has written letters to author Dylan Rhys Jones [pictured above] a former solicitor who represented him at his trial, and publishers Y Lolfa, who say they stand by ever word in the book.

Mr Jones revealed that Moore had previously said he wanted to help him with his research for the book and had even sent him a Christmas card last year.

Although he stopped short of admitting to the murders, in a recent letter Moore also asked Mr Jones to include in the preface of the book that he wanted to apologise to the people of North Wales for the trouble he had caused.

The  book, The Man in Black: Peter Moore – Wales’ Worst Serial Killer, is being published by Y Lolfa on Friday, September 25, to coincide with the 25th anniversary of the vicious murders which Moore said he committed for “fun”.

In his letter to Mr Jones, which was written from his cell in Wakefield Prison, Moore wrote: “I have read the report of your book….and I am not happy about several aspects.

He added that the matter was now in the hands of his solicitor and he warned of “possible legal action”.

In the letter to Y Lolfa, he went further, saying that the matter would “end up in court” if publication went ahead.

In the early hours of Christmas Eve morning, 1995, at Llandudno police station the Nazi-obsessed Moore admitted the killings in a three-month spree that had begun on Anglesey in September, terrorising the gay community in North Wales and Merseyside.

Mr Jones sat next to Moore, a softly spoken film fanatic from Kinmel Bay who owned a chain of cinemas in Bagillt, Denbigh, Holyhead and Blaenau Ffestiniog, during the jaw-dropping 45-minute confession to two detectives from North Wales Police. He later withdrew the confession and pleaded not guilty at his trial.

The 1995 murders began when Moore, who always dressed in black, stabbed 56-year-old Henry Roberts to death at his home near Caergeiliog, Holyhead – there were 27 wounds in the retired railway worker’s body.

The reign of terror continued as Edward Carthy, a 28-year-old man whom Moore met in a gay bar in Liverpool, was stabbed to death in Clocaenog Forest in the October, followed by Keith Randles, a 49-year-old traffic manager from Chester, in November 1995 on the A5 in Anglesey.

His final victim was Anthony Davies, 40; stabbed and left to die on Pensarn Beach, near Abergele in December.

At Mold Crown Court in November 1996, Moore was sentenced to life imprisonment with a recommendation that he never be released.

Mr Jones no longer practices as a solicitor but lectures on Law and Criminology and helped create the Criminal Justice and Offender Management foundation degree course at Coleg Cambria and Chester University. He is a regular contributor to TV and radio.

He said: “The fact that Moore wrote to us did not come as a total shock. He likes the attention and he is an extremely manipulative control freak.

“I have had quite a few letters from him over the years. I wrote to him in August last year to let him know that I was writing the book and that I would like to meet him.

“He agreed to all that and in his eyes he has been helping for around six months.

“I have had long letters from him telling me about his background.

“At one stage he even asked me if I would include in the preface to the book an apology from him to the people of North Wales for the trouble he had caused. Obviously, that was never something I was going to agree to.

“He wasn’t admitting to the murders but he was apologising for the problems he had caused.

“I was there sat right next to him when he originally confessed to the murders but then recanted. He has changed his tune repeatedly – that’s the kind of person he is.

“He agreed for me to go and visit him in Wakefield Prison and I was vetted by the Home Office and was given permission to visit a Category A prisoner. Then a week before I was due to see him, I had a letter saying that he no longer wanted to see me.

“He is clearly a man you cannot trust and tries to manipulate people from his prison cell. That’s not going to happen and the fact remains that he will never see the light of day again – he is going to die in prison.

“He sent me a Christmas card last year – but I am clearly off the list now. There’s going to be a gap on the mantlepiece next Christmas.”

Publisher Lefi Gruffudd from Y Lolfa said: “Clearly, we stand by every word in the book which has been meticulously researched and written by his former solicitor who provides a fascinating insight into the twisted mind of a depraved serial killer.”

The Man in Black: Peter Moore – Wales’ Worst Serial Killer is published by Y Lolfa on Friday, September 25, priced at £9.99.