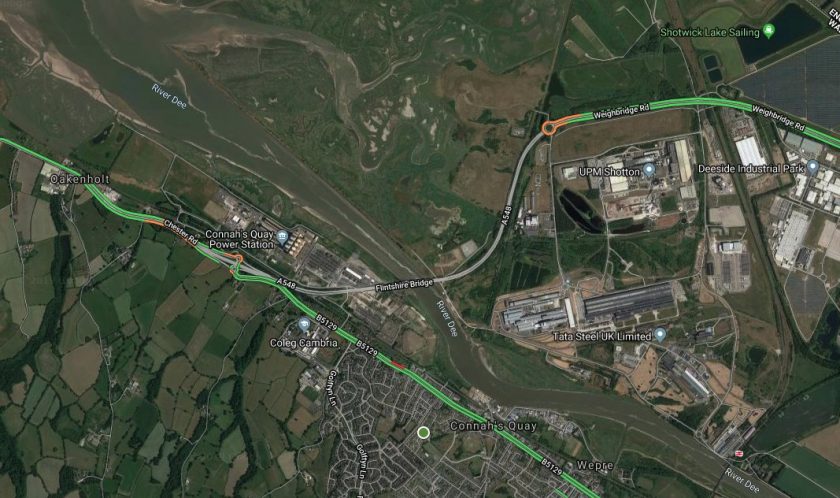 Flintshire Bridge set on reopen at 10am

Update: Flintshire Bridge will reopen at 10am the council has said.

A spokesperson told Deeside.com, “The A548 Flintshire Bridge has been closed due to strong winds. The road will be reopened by 10am.”

Earlier report: Flintshire Bridge has been closed this morning (Monday, December 9) due to strong winds.

There’s no official word on the closure but Mark has been in touch to say the bridge was closed at 5.40 this morning.

Traffic maps also show there are no vehicles using the bridge at the moment (6.15am)

The Met Office initially issued a yellow weather alert for gale force winds in Flintshire, it meant plans were in place to shut the bridge from 3am if the forecasts remained the same.

The Met Office canceled the specific warning for Flintshire on Sunday afternoon though it remains in place for coastal areas on Wales.

Gusts have been hitting around 42mph so far this morning.

It is unclear when the bridge will open, winds are expected to die down later on this afternoon.

What is the criteria the council uses when it decides to close the bridge?

Forecasts are reviewed daily by a Duty Officer to anticipate any likely restrictions and resources required to implement a bridge closure or lane closures.

When wind gusts are forecast over 50 mph within the next 24 hours the Duty Officer will ring their weather service provider and seek advice from a forecaster of the risk of high winds.

The council says experience has shown that a planned closure based on forecasts is preferable to waiting until wind speeds increase and reacting to them at short notice.

“If a closure is planned, due to a forecast advice from weather service provider, the council press office should be informed immediately so they can list the closure on the council web site and inform local radio stations in advance of the closure.” The council says.

In exceptional circumstances a down-wind lane closure can be implemented to allow the bridge to remain open for wind speeds above 55 mph.

Generally this method of restriction would only be considered when there is advance notice of anticipated high wind speeds over a prolonged period.

A down-wind lane closure provides an empty lane in the event that a vehicle is blown off course or blown over, in addition traffic speed is generally reduced.

If a full closure is decided upon, the duty officer will arrange for warning and diversion signs to be deployed and for the
bridge to be close.

The police will inform the media and other emergency services of the closure.

If a lane closure is decided upon the Duty Officer will arrange this and inform FCC Street works Section and the Police.

Should no immediate action is required, the situation will be monitored by the Duty Officer until the risk of high winds has receded.

If a restriction/closure is implemented the Duty Officer will monitor the situation and contact the Police to keep them informed of the anticipated re-opening time.

When the weather improves the Duty Officer will decide on a time for the removal of any restriction.