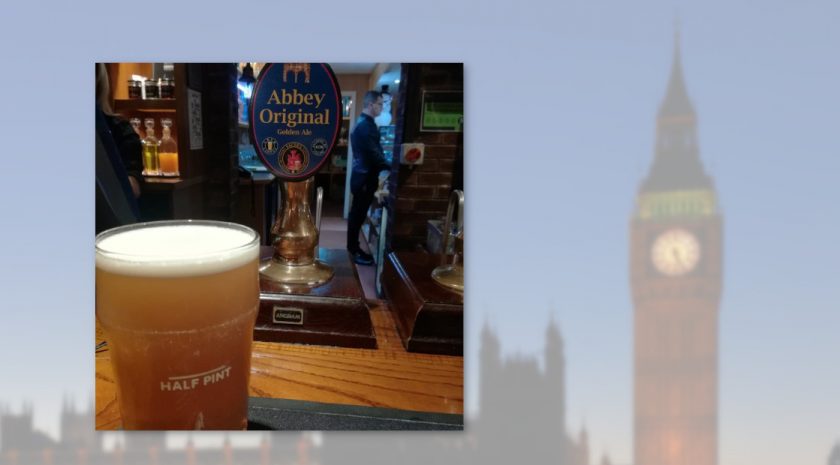 Pints of beer from a Flint-based will be raised at the seat of Government after Delyn MP David Hanson nominated Abbey Original as a guest ale in the Strangers’ Bar inside the House of Commons.

Aber Road based Facer’s Brewery has been awarded the honour of supplying the Houses of Parliament with its beer from next week.

MPs from across the country are able to nominate their local breweries to supply one of only two cask ales served in The Strangers’ Bar.

The beer must be from an independent, regional brewer and face tough competition as MPs from across the country nominate their local breweries throughout the year.

Facer’s Brewery supplies quality, handcrafted real ale to pubs and other venues across North Wales and North West England. They are also the oldest brewery in Flintshire.

Dave Facer started his own brewery in Salford, Greater Manchester, in February 2003.

He shared the premises and equipment with Bazen’s Brewery, which had itself started a few months earlier.

In 2005, Dave and Annette, his wife, decided to move home and brewery to Flintshire.

The new Facer’s Brewery started production in Flint in February 2006.

Dave’s first job in a brewery was in 1977 in the Quality Control Lab at Wilson’s Brewery in Manchester.

He later became a fully-fledged brewer and when Wilson’s closed he joined Tetley’s brewery in Leeds followed by stints at Chester’s of Salford and Whitbread at Samlesbury before becoming a brewer at Boddington’s in 1991.

In 1999 Dave was appointed Head Brewer at Boddington’s.

This knowledge of brewing expertise has been passed on to Toby Dunn who now owns and runs the brewery.

Toby will be driving the business onto its next exciting chapter and producing more delicious beers.

“Facer’s Brewery in Flint is just one of the jewels in the crown of Flintshire’s food and drink industry.

The expertise that Toby has developed as a brewer means that Flint has a pint to be proud of. That is why I did not hesitate to nominate Facer’s to be a guest ale in Parliament.

The competition to be selected to be a guest beer in the Palace of Westminster cannot be understated.

Each and every MP from across the country can apply for their local brewery to supply beer and for Facer’s Abbey Original to be selected shows the quality of his product.

The food and drink industry is worth a great deal to Flintshire.

As our economy changes in North Wales, we need to harness the power of tourism, food and drink as it demonstrates that we are a community that is proud of our produce which we cannot get anywhere else in the world.

I look forward to seeing more people spending their time and money in North Wales so that we can drive a better future for all.”

“We welcome and relish this opportunity to promote our high-quality beers to a wider clientele. Facer’s beers have already earned respect and recognition from across Wales and the North West, because of their reliability and consistency.

But we will not be complacent in our outlook towards the future as we endeavour to seek more diverse products to satisfy all tastes whilst maintaining a high standard as expected of our customer base.

In these days of transition in the UK, we believe that our business is a true reflection of what we all can aspire to for the future. Our uniqueness and individuality are characteristics of our success, but we must also have the capability to adapt to change.”