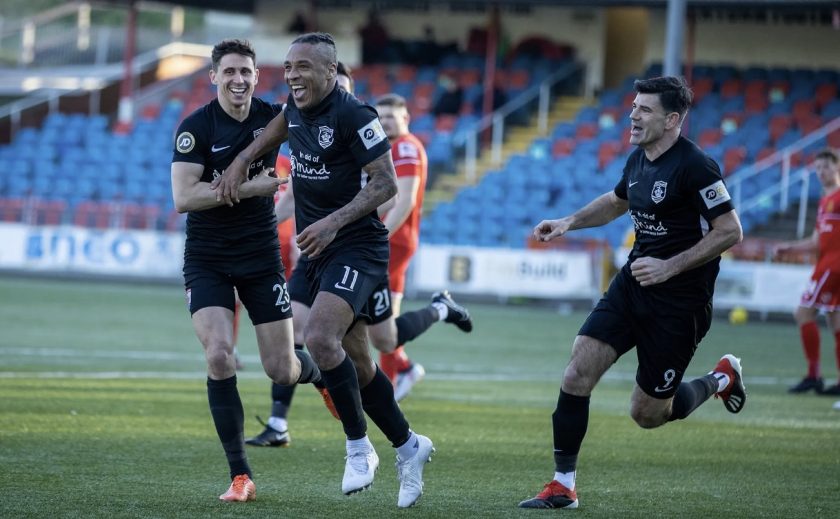 Connah’s Quay Nomads finished phase one of the JD Cymru Premier with a 5-1 victory over Newtown AFC at Latham Park on Good Friday.

A Jamie Breese goal gave the hosts an early lead, but a formidable performance from Connah’s Quay saw them take the victory with five different goalscorers.

The fixture was part of the final card of Phase One in the JD Cymru Premier, with all 12 teams kicking off against each other at 5:00pm across Wales.

Although Nomads’ fate in the top six was already long sealed, the trip to Newtown marked a chance for Andy Morrison’s side to stay top after 22 games, a hallmark of champions in recent years.

Connah’s Quay arrived in mid-Wales on a run of 13 games unbeaten, having won four and drawn one since resuming against Newtown at Deeside on 6 March, where they ran out 2-1 winners.

Andy Morrison named a much unchanged line up from their last game two weeks ago – a 2-0 victory over Haverfordwest – only replacing John Disney with Kris Owens, whilst Aeron Edwards returned from injury to start on the bench. 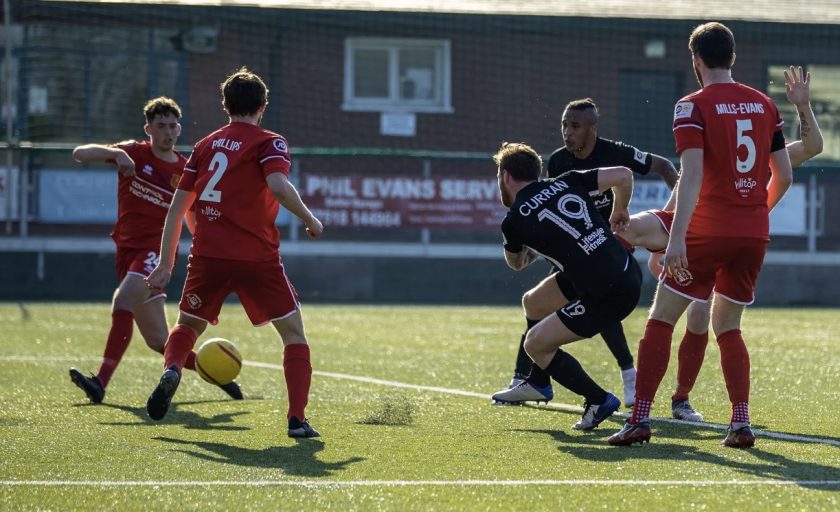 After kick off it was Nomads who pressed forward first, but Newtown hit back to score with their very first chance on goal in the third minute.

Jamie Breese received a through ball after Newtown countered a Nomads press, and ran clear on goal to score from around eight yards.

After going behind early on, Nomads pressed for an equaliser with urgency, pinning the hosts in their own half. In the 10th, it nearly paid off when Neil Danns sent an effort off the right post from the edge of the penalty area.

After 15 minutes, the likes of Aron Williams and Danny Davies were causing problems for the Newtown defence with their cutting runs and deliveries into the area.

In the 20th, Nomads finally found the breakthrough when Aron Williams targeted the goalmouth with a long throw-in, where Craig Curran received the ball, turned and slotted in at close range.

With play level once again, both sides were pushing to retake the lead at half time, with Breese going on another dangerous run in the 22nd only to be stopped by Nomads captain George Horan.

On 24 minutes, Breese was again in the mix as he looked to convert a cross from Rushton, however, Danny Harrison was there to stop him, clattering into the goal post in doing so, but remaining on the field after treatment. 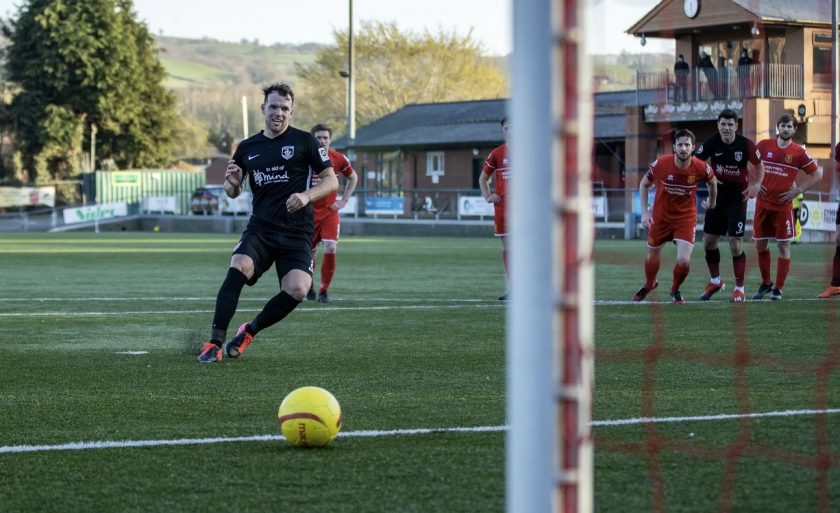 After half an hour, Nomads were enjoying the majority of the possession as they plotted their way into the Newtown area. In the 34th, they had a free-kick attempt from 20 yards out taken by Kris Owens, but keeper Dave Jones came off his line to collect it.

In the 39th, Connah’s Quay looked to counter a Newtown movement with a thundering run down the left wing from Curran, crossing to Davies whose first-time effort went wide of the goal.

The interval arrived and with the scores level, Nomads came out in the second half and went on to dominate the proceedings.

They quickly got into the Robins’ final third and won a free-kick and corner kick, the latter of which was cancelled out with the referee awarding a Newtown free kick in their own area.

After 50 minutes, Nomads were piling the pressure on with aerial balls into the Newtown area, with Wilde picking up a yellow card for a foul against the keeper in the 54th.

Newtown had a rare chance in the 56th, but Horan and Harrison connected to stop Tyrone Ofori running clear just on the edge of the Nomads’ area.

With 60 minutes played, Connah’s Quay were on top but still looking for a second goal to take the lead. Andy Morrison then made his first changes in a double substitution, introducing Jamie Insall and Aeron Edwards for Danny Harrison and first-half goalscorer Curran.

In the 63rd, Nomads’ much sought-after goal arrived thanks to the quick wits of Neil Danns, who opened his club account along the way.

After a series of aerial challenges in and around the Newtown area, the ball bounced towards the goalkeeper, but Danns got a touch to snatch the ball out of his reach, and headed in off the underside of the crossbar.

Having come back from 0-1 down to lead, Nomads didn’t let up and were soon searching for a third. In the 72nd, Davies sent an excellent cross towards the top left corner of the goal where Wilde headed just wide.

But just two minutes later they sealed an opportunity to get a third, when referee Alex McInch pointed to the spot in a crowded Newtown area.

Nomads’ serial spot taker Callum Morris stepped up and made no mistake, slotting in to give his side a commanding 3-1 lead as the game entered its final 15 minutes.

As the final 10 minutes approached, Andy Morrison made his final change of the game, bringing on Johnny Hunt in place of Danny Davies.

Having battled after Newtown’s opener in the 3rd minute, Nomads spent the latter stages of the game in full control and extended the lead to 4-1 via Wilde in the 85th who headed in an Aron Williams cross.

With the likes of Danny Holmes in the Nomads defence still working hard to nullify any late Newtown attempts, the game looked all but over as injury time approached.

But Jamie Insall found time to add a fifth in the 90th, getting on the end of an Edwards ball to send a deft header into the bottom left corner.

After three minutes of injury time, Nomads’ victory and place at the top of the JD Cymru Premier for the end of phase one was confirmed.

Of the 22 games in the season so far, they have taken 57 points with 18 wins and three draws, losing only once.

Andy Morrison’s side will now take their 14 game unbeaten run into phase two, with fixtures for the final 10 fixtures of the JD Cymru Premier due to be announced shortly.

Match report by Will Catterall