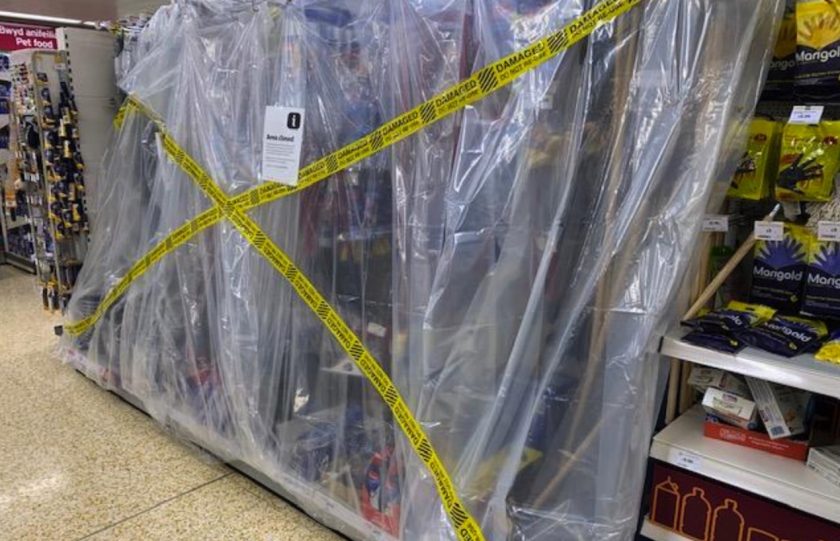 First minister Mark Drakeford has said he will review “how the weekend has gone with the supermarkets” and make sure that “common sense is applied.”

Supermarkets in Wales have been banned from selling ‘non-essential’ items during the two-week firebreak lockdown which began at 6pm on Friday.

The move has brought fierce criticism from both opposition politicians and the public alike but the first minister said the ban was to create a “level the playing field with small and high street stores.”

“We are looking to minimise the amount of time that people spend out of their homes during this two week period.”

“This is not a period to be browsing around supermarkets looking for non-essential goods.” He said.

The Federation of Small Businesses (FSB) raised concerns about the closure of all non-essential retail, they said it is creating an unfair advantage if supermarkets are able to continue selling non-essential items.

FSB said that at a time when small businesses on the high street are forced to close, it would be an “unacceptable advantage” for supermarkets particularly in the run-up to Christmas.

A Conservative MS raised the matter of supermarkets selling clothing and hardware during the previous lockdown and said it felt ‘very wrong.’

“Businesses such as Asda, Morrisons, Tesco, were selling those items of clothing and hardware, and it felt very wrong and disproportionate to the small businesses.

First Minister Mark Drakeford said: “I think in the first set of restrictions people were reasonably understanding of the fact that supermarkets didn’t close all the things that they may have needed to.

“I don’t think people will be as understanding this time, and we will be making it clear to supermarkets they are only able to open those parts of their business that provide essential goods to people – and that will not include some of the things that Russell George has mentioned that other people are prevented from selling.”

“So we will make sure that there is a more level playing field in those next two weeks.”

Mr Russell has since distanced himself from the move, he tweeted: “I don’t support the Welsh Government’s approach to banning non-essential sales in Welsh shops, I’m the one that got the FM to admit his plans! Retail should be open, the National lockdown is the wrong approach.”

Baffling.
Close gyms, but keep all the chocolate and junk on the shelves because that’s essential 🤦🏼‍♀️

Can’t buy a book to read to keep the mind active through a worrying time, but you can buy some alcohol to wreck your health a little bit more!
Absolute shambles. #WelshLockdown pic.twitter.com/jSkltwNmjD

The Leader of the Conservatives in the Welsh Parliament, Paul Davies MS, said he has written to the Presiding Officer calling for the parliament to be recalled to discuss the decision to ban the selling of “non-essential.”

Currently, Members of the Welsh Parliament are in the October half-term recess.

Mr Davies said: “It is madness that people have been banned from buying books, bins and baby clothes in local shops. The Welsh Labour-led Government may not think these items are essential, but many will beg to differ.”

The issue is currently subject to a petition of more than 34,000 signatures by 8pm on the first day of it being launched.

Mr Davies added, “It’s a clear sign to Labour Ministers that people want this rule scrapped immediately and the Welsh Parliament must meet to resolve this matter as soon as possible.”

Non-essential items being covered up in supermarkets in Wales. Has it really come to this? pic.twitter.com/YwtIUjgc8P

Pictures posted on social media of supermarket aisles being cordoned off and ‘non-essential’ items covered over in plastic sheeting have been shared thousands of times and have caused a huge amount of anger.

In a tweet this evening Mark Drakeford said: “Thank you for all your efforts over the last 24 hours to stay at home. We know people are fed up. It’s not easy, but we all have a responsibility to stop the virus spreading.”

“We’ll be reviewing how the weekend has gone with the supermarkets and making sure that common sense is applied. Supermarkets can sell anything that can be sold in any other type of shop that isn’t required to close. In the meantime, please only leave home if you need to.”

We’ll be reviewing how the weekend has gone with the supermarkets and making sure that common sense is applied. Supermarkets can sell anything that can be sold in any other type of shop that isn’t required to close. In the meantime, please only leave home if you need to.