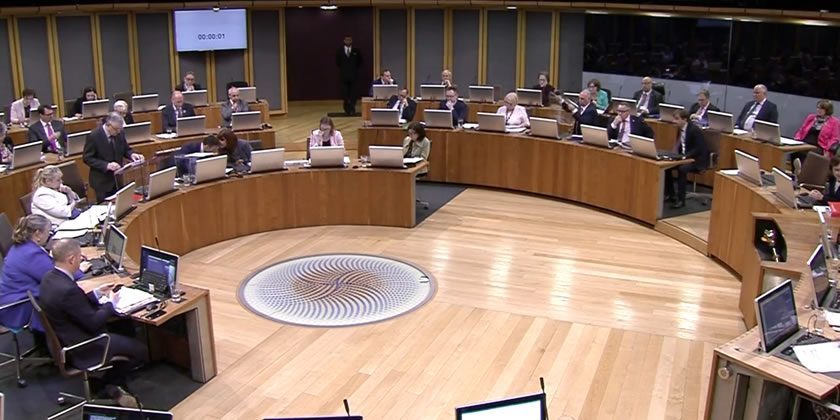 The below a summary of this week’s First Minister Questions session from Cardiff Bay via our partnership with SeneddHome.com.

First Minister Questions takes place every Tuesday when the Assembly is sitting and can be watched live via Senedd.tv

For those who have never ventured onto the Senedd site, you can view the session the below was taken from here, that displays a video of the meeting (along with creation of your own clips!) plus by clicking the ‘meeting information and papers’ link you are able to view all the supporting documentation, along with a link to the full transcript.

Delyth Jewell AM queried the process followed by the Welsh Government to overturn a decision by a local authority planning committee to reject planning permission, noting in her view ‘nobody is in a better position, surely, to make informed decisions about local planning than the people who live there’.

Asking for a reform in planning policy and citing an issue local to her she said, “In 2016, Caerphilly councillors voted against granting planning permission for a housing development at Hendredenny. Local residents were rightly angry to see this decision overturned by a Minister in Cardiff bay, and councillors are set to vote again on this tomorrow after planning chiefs approved the application.”

“First Minister, isn’t it time Welsh Government reformed planning policy to make it about planning in the meaningful sense of the word, by involving local voices from the start, and building the provision of suitable infrastructure and services into development plans from the beginning rather than imposing unwanted projects on local residents?”

The First Minister replied, “It’s important to be clear that the right of an appeal is a statutory right. It is set out in the Town and Country Planning Act 1990, and the appeals process that is followed in Wales was revised as recently as 2017, and the rules that govern the appeals process here in Wales were agreed here in this National Assembly.

“I hear what the Member says about the need to revise them further, but they were revised, and they were revised here on the floor of this Assembly as recently as the year before last. The changes were designed to make the system more proportionate, cost effective, and to open it more to public participation in the appeals process.

Welsh-speakers “treated like second-class citizens” by healthcare and universities

Plaid Cymru leader, Adam Price AM , said that while he has a right to ask questions to the First Minister in Welsh, his father didn’t have a right to ask opticians, pharmacists or dentists questions in Welsh. He also asked about the future of Welsh in higher education, particularly universities based in areas where Welsh was widely spoken.

“Today, a cross-party committee of this Senedd….state that there’s been very little, if any, progress made by the regulations that you’ve just published (due to be put to a vote in the Senedd tomorrow) in terms of giving people in Wales the right to receive health services in the language of their choice. Why, after 84 years, is my father still treated as a second-class citizen?”
– Adam Price AM

The First Minister – a former Health Minister – said it was important to receive services through the medium of Welsh and the regulations were an expansion of such duties. It’s a long-term project and he was heartened that many NHS staff now wear visible signs that they can communicate in Welsh.

As for universities, the First Minister said it was right that the Welsh Government doesn’t interfere with them as they’re independent bodies.

Leader of the Opposition, Paul Davies AM , asked whether health services were meeting the needs of young people. Only two centres for child and adolescent mental health are available in Wales offering just 27 beds. Many patients were now being treated out-of-area; was this acceptable?

The First Minister took a very different view. We don’t need more centres in Wales and the key was to prevent young people ending up in a position of needing high-level mental health services in the first place; some patient’s needs will be so exceptional they should receive specialist care, currently only available in England.

Paul Davies AM moved on to the Health & Social Care Quality Bill and the proposal to abolish Community Health Councils (CHCs):

“Do you think that now is the right time to be scrapping CHC’s that are trusted by patients and replacing them with citizen voice bodies that might not feel they can be critical of the Welsh Government….as they will be appointed by you, funded by you and then won’t want to be sacked by you?”
– Leader of the Opposition, Paul Davies AM

The First Minister told him CHCs were already funded and partly appointed by the Welsh Government, so the replacement body would be no different there. The new body will be “entirely independent of Government” and will operate across health and social care – unlike CHCs.

Mark Reckless AM returned to the Newport bypass issue, accusing Labour of breaking a clear manifesto commitment from 2016 to deliver it and quoting CBI as saying the decision to cancel it sent out a message that Wales “was not open for business”.

On the contrary, said the First Minister, adding that business groups were keen to feed ideas into how to solve the problems at Newport:

“I was very pleased to meet with the chief executive of the CBI, the Federation of Small Businesses and the Trades Union Congress last week to talk about the decision….They came to say how keen they were to participate in the group that will be established to come up with solutions. I think it’s hard to imagine a greater contrast between the constructive spirit the CBI and others came to that table and the carping tone that we have been offered by the Member again this afternoon.”
– First Minister, Mark Drakeford